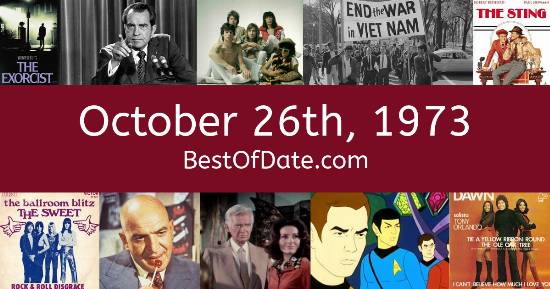 On October 26th, 1973, the following songs were at the top of the music charts in the USA and the UK.

The date is October 26th, 1973, and it's a Friday. Anyone born today will have the star sign Scorpio. Currently, people have "that Friday feeling" and are looking forward to the weekend.

The summer is long gone. Temperatures have started to become much cooler and the evenings are beginning to get darker. Fallen leaves have carpeted driveways, lawns, pathways and sidewalks and there's a fresh earthy scent in the ear. Halloween of 1973 is just days away. People are watching horror movies and thinking about which costume they are going to wear. Others are organizing parties.

In America, the song Midnight Train To Georgia by Gladys Knight & Pips is on top of the singles charts. Over in the UK, Daydreamer / Puppy Song by David Cassidy is the number one hit song. Richard Nixon is currently the President of the United States, and the movie Paper Moon is at the top of the Box Office.

"The Way We Were", starring Barbra Streisand, is being shown in movie theaters at the moment. If you were to travel back to this day, notable figures such as Oskar Schindler would be still alive. On TV, people are watching popular shows such as "Steptoe and Son", "The Flip Wilson Show", "The Bob Newhart Show" and "Barnaby Jones".

Meanwhile, gamers are playing titles such as "Pong", "Space Race" and "Gotcha". Kids and teenagers are watching TV shows such as "The Amazing Chan and the Chan Clan", "The Adventures of Black Beauty", "Bailey's Comets" and "The Addams Family". Popular toys at the moment include the likes of Uno (card game), Magnavox Odyssey, Baby Alive (doll) and Evel Knievel Stunt Cycle.

These are trending news stories and fads that were prevalent at this time. These are topics that would have been in the media on October 26th, 1973.

Check out our personality summary for people who were born on October 26th, 1973.

If you are looking for some childhood nostalgia, then you should check out October 26th, 1979, instead.

Celebrities, historical figures, and other notable people who were born on October 26th.

Wrestler.
Born on October 26th, 1978
He was born exactly 5 years after this date.

Richard Nixon was the President of the United States on October 26th, 1973.

Enter your date of birth below to find out how old you were on October 26th, 1973.
This information is not transmitted to our server.

Here are some fun statistics about October 26th, 1973.