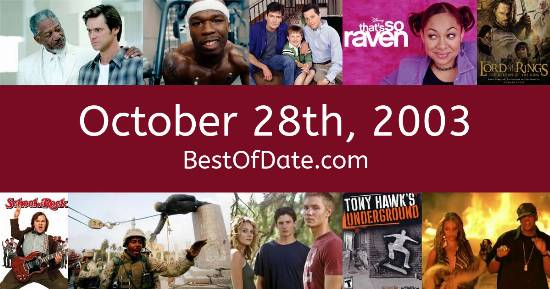 October 28th, 2003 relates to a fictional event in a movie, book, game or television series.

Songs that were on top of the music singles charts in the USA and the United Kingdom on October 28th, 2003.

The movie "Texas Chainsaw Massacre" was at the top of the box office on October 28th, 2003.

The date is October 28th, 2003 and it's a Tuesday. Anyone born today will have the star sign Scorpio. The summer is long gone. Temperatures have started to become much cooler and the evenings are beginning to get darker.

Fallen leaves have carpeted driveways, lawns, pathways and sidewalks and there's a fresh earthy scent in the ear. Halloween of 2003 is just days away. People are watching horror movies and thinking about which costume they are going to wear. Others are organizing parties. In America, the song Baby Boy by Beyonce is on top of the singles charts.

Over in the UK, Be Faithful by Fatman Scoop is the number one hit song. George W. Bush Jnr. is currently the President of the United States and the movie Texas Chainsaw Massacre is at the top of the Box Office. In the United Kingdom, Tony Blair is the current Prime Minister.

On TV, people are watching popular shows such as "Everybody Loves Raymond", "Sex and the City", "Star Trek: Enterprise" and "CSI: Miami". Meanwhile, gamers are playing titles such as "Animal Crossing", "Tom Clancy's Splinter Cell", "Star Wars: Knights of the Old Republic" and "The Simpsons Hit & Run". Kids and teenagers are watching TV shows such as "Dexter's Laboratory", "Lizzie McGuire", "The Fairly OddParents" and "Teen Titans".

If you're a kid or a teenager, then you're probably playing with toys such as the PlayStation 2, Bratz (dolls), Nintendo GameCube and Yu-Gi-Oh! Trading Card Game.

George W. Bush Jnr. was the President of the United States on October 28th, 2003.

Tony Blair was the Prime Minister of the United Kingdom on October 28th, 2003.

Enter your date of birth below to find out how old you were on October 28th, 2003.

Here are some fun statistics about October 28th, 2003.