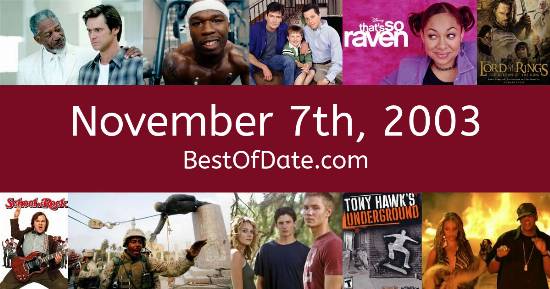 These songs were on top of the music charts in the United States and the United Kingdom on November 7th, 2003.

The movie "The Matrix Revolutions" was at the top of the Box Office on November 7th, 2003.

The following comments about November 7th, 2003 were written by our visitors.

The fact that there are incoming college freshmen who are the same age as Elf is starting to make me feel old.
Posted on July 26th, 2022 03:46

The date is November 7th, 2003, and it's a Friday. Anyone born today will have the star sign Scorpio. Currently, people have "that Friday feeling" and are looking forward to the weekend.

It's November, so the evenings are getting darker and the days are getting colder. In America, the song Baby Boy by Beyonce is on top of the singles charts. Over in the UK, Be Faithful by Fatman Scoop is the number one hit song.

George W. Bush Jnr. is currently the President of the United States, and the movie The Matrix Revolutions is at the top of the Box Office. In the United Kingdom, Tony Blair is the current Prime Minister. In technology news, more and more people are beginning to gain access to the Internet. Internet speeds are increasing and MP3 sharing is beginning to threaten the existence of music stores.

Internet users are using MSN Messenger to chat with each other online. A flash animation of badgers singing "badger, badger, badger" has become extremely popular on the Internet. The animation, which loops indefinitely, was published by British animator Jonti Picking in September, 2003. If you were to travel back to this day, notable figures such as Jonathan Brandis, Pat Tillman, Ronald Reagan and Ray Charles would all be still alive.

On TV, people are watching popular shows such as "7th Heaven", "Angel", "The Shield" and "Without a Trace". Meanwhile, gamers are playing titles such as "Medal of Honor: Frontline", "Championship Manager 4", "Warcraft III: The Frozen Throne" and "Soulcalibur II". Children and teenagers are currently watching television shows such as "CatDog", "Ed, Edd n Eddy", "Rocket Power" and "That's So Raven".

These are trending news stories and fads that were prevalent at this time. These are topics that would have been in the media on November 7th, 2003.

News stories and other events that happened around November 7th, 2003.

Check out our personality summary for people who were born on November 7th, 2003.

Television shows that people were watching in November, 2003.

Popular video games that people were playing in November of 2003.

If you are looking for some childhood nostalgia, then you should check out November 7th, 2009 instead.

Actress. Deceased
Born on November 7th, 1964
She was not alive on this date.

George W. Bush Jnr. was the President of the United States on November 7th, 2003.

Tony Blair was the Prime Minister of the United Kingdom on November 7th, 2003.

Find out what your age was on November 7th, 2003, by entering your DOB below.
This information is not saved on our server.

Here are some fun statistics about November 7th, 2003.