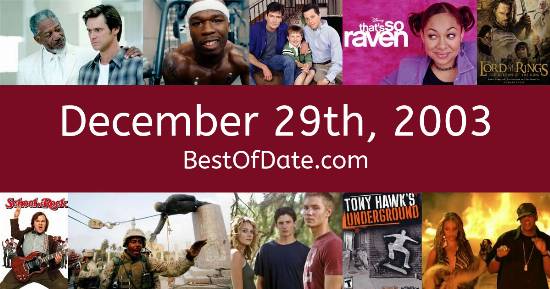 Songs that were on top of the music singles charts in the USA and the United Kingdom on December 29th, 2003.

The date is December 29th, 2003 and it's a Monday. Anyone born today will have the star sign Capricorn. Christmas Day of 2003 has just passed and many people are relaxing at home and enjoying the holiday season.

In America, the song Hey Ya by Outkast is on top of the singles charts. Over in the UK, Mad World by Michael Andrews & Gary Jules is the number one hit song. George W. Bush Jnr. is currently the President of the United States and the movie Return of the King is at the top of the Box Office.

Internet users are using MSN Messenger to chat with each other online. A flash animation of badgers singing "badger, badger, badger" has become extremely popular on the Internet. The animation, which loops indefinitely, was published by British animator Jonti Picking in September, 2003. On TV, people are watching popular shows such as "Alias", "Scrubs", "8 Simple Rules" and "One Tree Hill".

Meanwhile, gamers are playing titles such as "Animal Crossing", "Star Wars: Knights of the Old Republic", "Call of Duty" and "True Crime: Streets of LA". Kids and teenagers are watching TV shows such as "Rugrats", "CatDog", "SpongeBob SquarePants" and "Teen Titans". Popular toys at the moment include the likes of the PlayStation 2, Bratz (dolls), Yu-Gi-Oh! Trading Card Game and Beyblades (spinning top toys).

Celebrities, historical figures and notable people who were born on the 29th of December.

George W. Bush Jnr. was the President of the United States on December 29th, 2003.

Tony Blair was the Prime Minister of the United Kingdom on December 29th, 2003.

Enter your date of birth below to find out how old you were on December 29th, 2003.

Here are some fun statistics about December 29th, 2003.

Leave a comment and tell everyone why December 29th, 2003 is important to you.