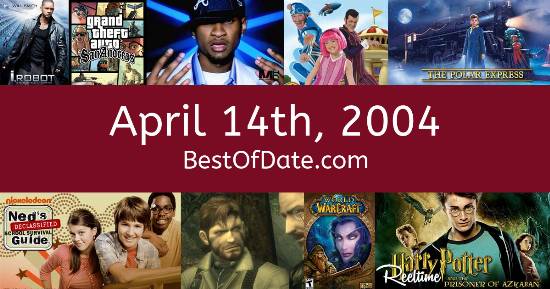 Songs that were on top of the music singles charts in the USA and the United Kingdom on April 14th, 2004.

This has so much information and I appreciate everyone who worked on it, but the one thing it didn't have was anything about cars. That makes me sad. I would really like to see an update with some car-related information. For example, "What car came out on this day or closest to this date". Something like that would be amazing, please.
Posted on October 10th, 2021 00:24

The date is April 14th, 2004 and it's a Wednesday. Anyone born today will have the star sign Aries. The summer of 2004 is drawing closer and temperatures have started to rise.

In America, the song Yeah by Usher is on top of the singles charts. Over in the UK, 5 Colours In Her Hair by McFly is the number one hit song. George W. Bush Jnr. is currently the President of the United States and the movie Passion of the Christ is at the top of the Box Office.

It's 2004, so the music charts are being dominated by the likes of Usher, Alicia Keys, Maroon 5, OutKast, Mario Winans, the Terror Squad and Ciara. If you were to travel back to this day, notable figures such as Pat Tillman, Ronald Reagan, Ray Charles and Marlon Brando would all be still alive. On TV, people are watching popular shows such as "ER", "JAG", "Stargate SG-1" and "Deadwood".

Meanwhile, gamers are playing titles such as "The Simpsons Hit & Run", "Pro Evolution Soccer 3", "Manhunt" and "Rome: Total War". Children and teenagers are currently watching television shows such as "Bob the Builder", "Malcolm in the Middle", "That's So Raven" and "My Life as a Teenage Robot". Popular toys at the moment include the likes of the PlayStation 2, Bratz dolls, Yu-Gi-Oh! Trading Card Game and RoboSapien (toy robot).

If you are looking for some childhood nostalgia, then check out April 14th, 2010 instead.

Tony Blair was the Prime Minister of the United Kingdom on April 14th, 2004.

Enter your date of birth below to find out how old you were on April 14th, 2004.