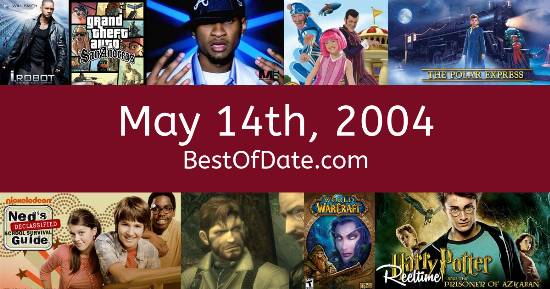 Songs that were on top of the music singles charts in the USA and the United Kingdom on May 14th, 2004.

The date is May 14th, 2004 and it's a Friday. Anyone born today will have the star sign Taurus. Currently, people have "that Friday feeling" and are looking forward to the weekend.

The summer of 2004 has finally arrived. The weather has warmed up and the evenings are brighter than usual. In America, the song Yeah by Usher is on top of the singles charts. Over in the UK, F**k It by Eamon is the number one hit song.

George W. Bush Jnr. is currently the President of the United States and the movie Troy is at the top of the Box Office. In the United Kingdom, Tony Blair is the current Prime Minister. In technology news, more and more people are beginning to gain access to the Internet. Internet speeds are increasing and MP3 sharing is beginning to threaten the existence of music stores.

It's 2004, so the music charts are being dominated by the likes of Usher, Alicia Keys, Maroon 5, OutKast, Mario Winans, the Terror Squad and Ciara. If you were to travel back to this day, notable figures such as Ronald Reagan, Ray Charles, Marlon Brando and Rick James would all be still alive. On TV, people are watching popular shows such as "7th Heaven", "King of the Hill", "The Apprentice" and "Pimp My Ride".

Meanwhile, gamers are playing titles such as "Championship Manager 4", "Star Wars: Knights of the Old Republic", "Soulcalibur II" and "Prince of Persia: The Sands of Time". Kids and teenagers are watching TV shows such as "Rugrats", "Rocket Power", "Malcolm in the Middle" and "Kim Possible". If you're a kid or a teenager, then you're probably playing with toys such as Betty Spaghetty (doll), Bratz dolls, Yu-Gi-Oh! Trading Card Game and RoboSapien (toy robot).

Notable events that occurred around May 14th, 2004.

If you are looking for some childhood nostalgia, then check out May 14th, 2010 instead.

Historical weather information for May 14th, 2004.

Tony Blair was the Prime Minister of the United Kingdom on May 14th, 2004.