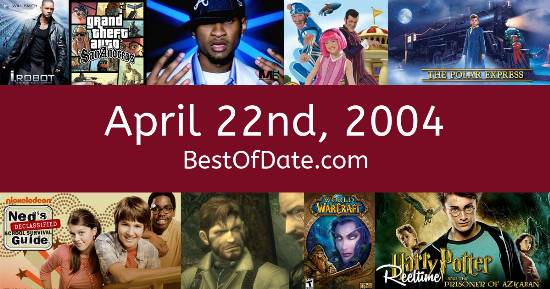 Songs that were on top of the music singles charts in the USA and the United Kingdom on April 22nd, 2004.

The date is April 22nd, 2004 and it's a Thursday. Anyone born today will have the star sign Taurus. The summer of 2004 is drawing closer and temperatures have started to rise.

In America, the song Yeah by Usher is on top of the singles charts. Over in the UK, F**k It by Eamon is the number one hit song. George W. Bush Jnr. is currently the President of the United States and the movie Kill Bill Vol. 2 is at the top of the Box Office.

It's 2004, so the music charts are being dominated by the likes of Usher, Alicia Keys, Maroon 5, OutKast, Mario Winans, the Terror Squad and Ciara. On TV, people are watching popular shows such as "Rugrats", "The Wild Thornberrys", "The Sopranos" and "Futurama". Meanwhile, gamers are playing titles such as "Star Wars: Knights of the Old Republic", "True Crime: Streets of LA", "Manhunt" and "Rome: Total War".

Kids and teenagers are watching TV shows such as "Friends", "CatDog", "The Powerpuff Girls" and "Grounded for Life". If you're a kid or a teenager, then you're probably playing with toys such as the PlayStation 2, Bratz (dolls), Yu-Gi-Oh! Trading Card Game and RoboSapien (toy robot).

If you are looking for some childhood nostalgia, then check out April 22nd, 2010 instead.

Celebrities, historical figures and notable people who were born on the 22nd of April.

Tony Blair was the Prime Minister of the United Kingdom on April 22nd, 2004.

Enter your date of birth below to find out how old you were on April 22nd, 2004.