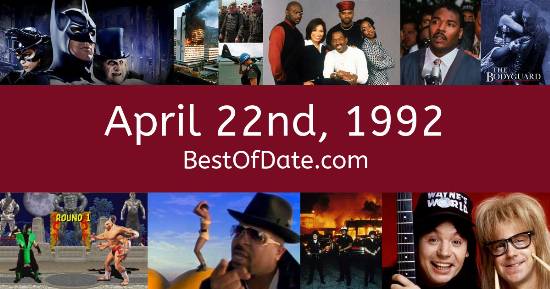 These songs were on top of the music charts in the United States and the United Kingdom on April 22nd, 1992.

The date is April 22nd, 1992, and it's a Wednesday. Anyone born today will have the star sign Taurus. The summer of 1992 is drawing closer and temperatures have started to rise.

A war has broken out in Bosnia and Herzegovina following the shelling of Sarajevo by Serb forces. In London, a televised "Freddie Mercury Tribute Concert" has been broadcast to one billion people. In the Mexican city of Guadalajara, 215 have been killed after fuel that had been leaked into a sewer causes multiple explosions.

If you were to travel back to this day, notable figures such as Robert Reed, Anthony Perkins, Audrey Hepburn and Thurgood Marshall would all be still alive. On TV, people are watching popular shows such as "Murder, She Wrote", "The Golden Girls", "Star Trek: The Next Generation" and "One Foot in the Grave". Meanwhile, gamers are playing titles such as "F-16 Combat Pilot", "Civilization", "Desert Strike " and "The Legend of Zelda: A Link to the Past".

Children and teenagers are currently watching television shows such as "Thomas the Tank Engine", "Saved by the Bell", "Blossom" and "Darkwing Duck". If you're a kid or a teenager, then you're probably playing with toys such as Sylvanian Families, Jenga, the SEGA Game Gear and the Super Nintendo Entertainment System (SNES).

These are trending news stories and fads that were prevalent at this time. These are topics that would have been in the media on April 22nd, 1992.

Check out our personality summary for people who were born on April 22nd, 1992.

If you are looking for some childhood nostalgia, then you should check out April 22nd, 1998, instead.

Celebrities, historical figures, and other notable people who were born on April 22nd.

Enter your date of birth below to find out how old you were on April 22nd, 1992.
This information is not transmitted to our server.