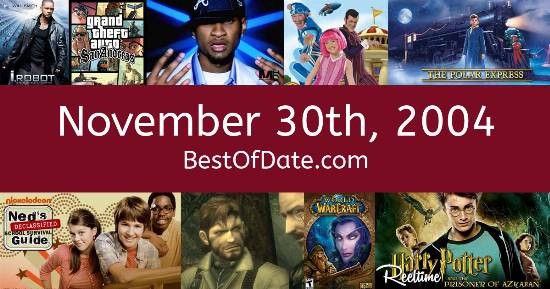 November 30th, 2004 relates to a fictional event in a movie, book, game or television series.

Songs that were on top of the music singles charts in the USA and the United Kingdom on November 30th, 2004.

The movie "The Incredibles" was at the top of the box office on November 30th, 2004.

This was the day that Ken Jennings finally lost on Jeopardy and I remember seeing the episode while I was waiting for my parents to finish up closing up their business for the day.
Posted on November 20th, 2021 18:38

The date is November 30th, 2004 and it's a Tuesday. Anyone born today will have the star sign Sagittarius. It's November, so the evenings are getting darker and the days are getting colder.

In America, the song My Boo by Usher & Alicia Keys is on top of the singles charts. Over in the UK, I'll Stand By You by Girls Aloud is the number one hit song. George W. Bush Jnr. is currently the President of the United States and the movie The Incredibles is at the top of the Box Office.

If you were to travel back to this day, notable figures such as Dimebag Darrell, Johnnie Cochran, Pope John Paul II and Luther Vandross would all be still alive. On TV, people are watching popular shows such as "Futurama", "The Wire", "Punk'd" and "Cold Case". Meanwhile, gamers are playing titles such as "SSX 3", "Rome: Total War", "The Legend of Zelda: The Minish Cap" and "World of Warcraft".

Kids and teenagers are watching TV shows such as "SpongeBob SquarePants", "Dora the Explorer", "One Tree Hill" and "Unfabulous". If you're a kid or a teenager, then you're probably playing with toys such as Betty Spaghetty (doll), HitClips audio player, the PlayStation 2 and Beyblades (spinning top toys).

If you are looking for some childhood nostalgia, then check out November 30th, 2010 instead.

George W. Bush Jnr. was the President of the United States on November 30th, 2004.

Tony Blair was the Prime Minister of the United Kingdom on November 30th, 2004.

Enter your date of birth below to find out how old you were on November 30th, 2004.

Here are some fun statistics about November 30th, 2004.