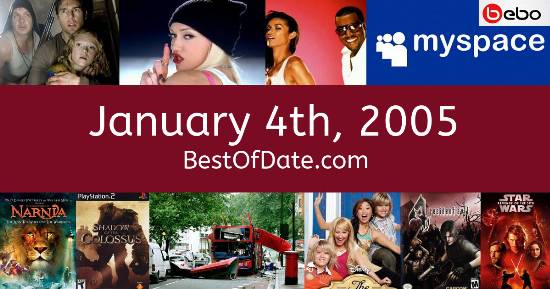 Songs that were on top of the music singles charts in the USA and the United Kingdom on January 4th, 2005.

The date is January 4th, 2005 and it's a Tuesday. Anyone born today will have the star sign Capricorn. People are starting to return back to work and school after the Christmas holidays.

In America, the song Let Me Love You by Mario is on top of the singles charts. Over in the UK, Do They Know It's Christmas by Band Aid 20 is the number one hit song. George W. Bush Jnr. is currently the President of the United States and the movie Meet the Fockers is at the top of the Box Office.

It's 2005, so the music charts are being dominated by the likes of Mariah Carey, Gwen Stefani, Mario, Kelly Clarkson, 50 Cent, Kanye West and Ciara. If you were to travel back to this day, notable figures such as Johnnie Cochran, Pope John Paul II, Luther Vandross and Rosa Parks would all be still alive. On TV, people are watching popular shows such as "Charmed", "Smallville", "Cold Case" and "Boston Legal".

Meanwhile, gamers are playing titles such as "The Sims 2", "Ratchet & Clank: Up Your Arsenal", "Half-Life 2" and "World of Warcraft". Kids and teenagers are watching TV shows such as "7th Heaven", "Ed, Edd n Eddy", "Grizzly Tales for Gruesome Kids" and "Ned's Declassified School Survival Guide". If you're a kid or a teenager, then you're probably playing with toys such as Betty Spaghetty (doll), the PlayStation 2, Yu-Gi-Oh! Trading Card Game and RoboSapien (toy robot).

If you are looking for some childhood nostalgia, then check out January 4th, 2011 instead.

George W. Bush Jnr. was the President of the United States on January 4th, 2005.

Tony Blair was the Prime Minister of the United Kingdom on January 4th, 2005.

Enter your date of birth below to find out how old you were on January 4th, 2005.

Here are some fun statistics about January 4th, 2005.