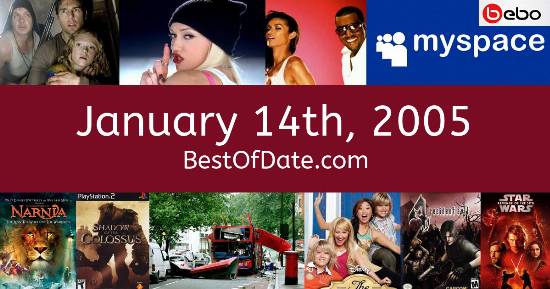 Songs that were on top of the music singles charts in the USA and the United Kingdom on January 14th, 2005.

The date is January 14th, 2005 and it's a Friday. Anyone born today will have the star sign Capricorn. Currently, people have "that Friday feeling" and are looking forward to the weekend.

The Christmas holiday season is long over, the decorations have been taken down and a sense of normality has returned. In America, the song Let Me Love You by Mario is on top of the singles charts. Over in the UK, Against All Odds by Steve Brookstein is the number one hit song.

George W. Bush Jnr. is currently the President of the United States and the movie Coach Carter is at the top of the Box Office. In the United Kingdom, Tony Blair is the current Prime Minister. In technology news, more and more people are beginning to gain access to the Internet. Internet speeds are increasing and MP3 sharing is beginning to threaten the existence of music stores.

Practically every teenager and adult has a MySpace or a Bebo account. It's 2005, so the music charts are being dominated by the likes of Mariah Carey, Gwen Stefani, Mario, Kelly Clarkson, 50 Cent, Kanye West and Ciara. Jennifer Aniston and Brad Pitt have just announced that they are separating.

If you were to travel back to this day, notable figures such as Johnnie Cochran, Pope John Paul II, Luther Vandross and Rosa Parks would all be still alive. On TV, people are watching popular shows such as "Everybody Loves Raymond", "Punk'd", "Two and a Half Men" and "Extreme Makeover: Home Edition". Meanwhile, gamers are playing titles such as "Tom Clancy's Splinter Cell: Pandora Tomorrow", "Rome: Total War", "Halo 2" and "Metal Gear Solid 3: Snake Eater".

Kids and teenagers are watching TV shows such as "Malcolm in the Middle", "The Fairly OddParents", "Kim Possible" and "LazyTown". If you're a kid or a teenager, then you're probably playing with toys such as Yu-Gi-Oh! Trading Card Game, Beyblades (spinning top toys), RoboSapien (toy robot) and the Nintendo DS.

If you are looking for some childhood nostalgia, then check out January 14th, 2011 instead.

George W. Bush Jnr. was the President of the United States on January 14th, 2005.

Tony Blair was the Prime Minister of the United Kingdom on January 14th, 2005.

Enter your date of birth below to find out how old you were on January 14th, 2005.

Here are some fun statistics about January 14th, 2005.