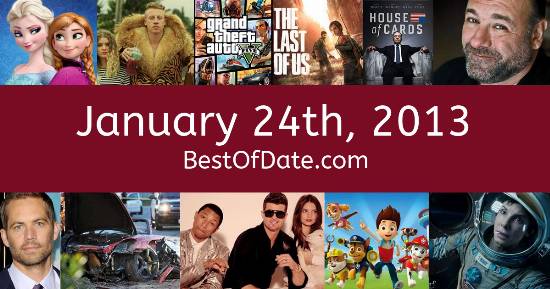 On January 24th, 2013, the following songs were at the top of the music charts in the USA and the UK.

The top "Box Office" movie on this date was the film "Mama".

The date is January 24th, 2013, and it's a Thursday. Anyone born today will have the star sign Aquarius. In America, the song Locked Out Of Heaven by Bruno Mars is on top of the singles charts.

Over in the UK, Get Up by Bingo Players is the number one hit song. Barack Obama is currently the President of the United States, and the movie Mama is at the top of the Box Office. In the United Kingdom, David Cameron is the current Prime Minister.

Video rental stores such as Blockbuster are continuing to close their doors at the moment. This is due to the increasing popularity of online streaming services such as Netflix and Hulu. It's 2013, so the music charts are being dominated by artists such as Macklemore, Robin Thicke, Imagine Dragons and Bruno Mars. A new video-hosting service called "Vine" has just been launched.

If you were to travel back to this day, notable figures such as Chris Kyle, Reeva Steenkamp, Hugo Chavez and James Gandolfini would all be still alive. On TV, people are watching popular shows such as "Desperate Housewives", "How I Met Your Mother", "Dexter" and "Glee". Meanwhile, gamers are playing titles such as "Diablo III", "XCOM: Enemy Unknown", "Dishonored" and "Far Cry 3".

Kids and teenagers are watching TV shows such as "Peppa Pig", "WordGirl", "Jessie" and "Dog with a Blog". Popular toys at the moment include the likes of the Xbox 360, the PlayStation 3, Skylanders Giants figures and the Wii U.

These are trending news stories and fads that were prevalent at this time. These are topics that would have been in the media on January 24th, 2013.

Check out our personality summary for people who were born on January 24th, 2013.

Television shows that people were watching in January, 2013.

Popular video games that people were playing in January of 2013.

If you are looking for some childhood nostalgia, then you should check out January 24th, 2019, instead.

Barack Obama was the President of the United States on January 24th, 2013.

Enter your date of birth below to find out how old you were on January 24th, 2013.
This information is not transmitted to our server.

Here are some fun statistics about January 24th, 2013.