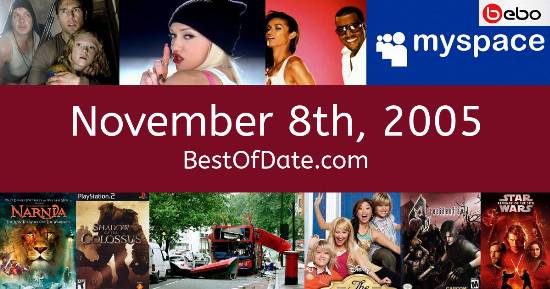 Songs that were on top of the music singles charts in the USA and the United Kingdom on November 8th, 2005.

The date is November 8th, 2005 and it's a Tuesday. Anyone born today will have the star sign Scorpio. It's November, so the evenings are getting darker and the days are getting colder.

In America, the song Gold Digger by Kanye West & Jamie Foxx is on top of the singles charts. Over in the UK, You Raise Me Up by Westlife is the number one hit song. George W. Bush Jnr. is currently the President of the United States and the movie Saw II is at the top of the Box Office.

It's 2005, so the music charts are being dominated by the likes of Mariah Carey, Gwen Stefani, Mario, Kelly Clarkson, 50 Cent, Kanye West and Ciara. Satirical factoids about actor Chuck Norris are extremely popular at the moment. These "Chuck Norris Facts" consist of absurd hyperbolic claims about Norris' toughness. On TV, people are watching popular shows such as "ER", "Without a Trace", "Two and a Half Men" and "Deadwood".

Meanwhile, gamers are playing titles such as "Halo 2", "Resident Evil 4", "Lego Star Wars: The Video Game" and "F.E.A.R.". Children and teenagers are currently watching television shows such as "SpongeBob SquarePants", "Teen Titans", "Laguna Beach: The Real Orange County" and "Go, Diego, Go!". If you're a kid or a teenager, then you're probably playing with toys such as the PlayStation 2, Yu-Gi-Oh! Trading Card Game, the Nintendo DS and the PSP.

Celebrities, historical figures and notable people who were born on the 8th of November.

George W. Bush Jnr. was the President of the United States on November 8th, 2005.

Tony Blair was the Prime Minister of the United Kingdom on November 8th, 2005.

Enter your date of birth below to find out how old you were on November 8th, 2005.

Here are some fun statistics about November 8th, 2005.

Have something to say about November 8th, 2005?