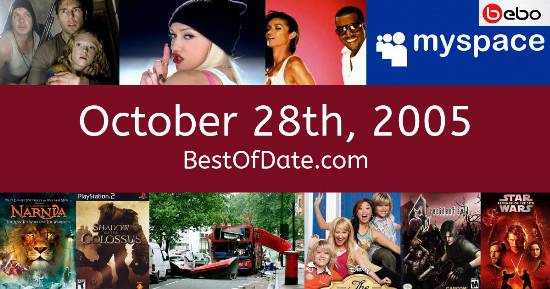 Songs that were on top of the music singles charts in the USA and the United Kingdom on October 28th, 2005.

The date is October 28th, 2005 and it's a Friday. Anyone born today will have the star sign Scorpio. Currently, people have "that Friday feeling" and are looking forward to the weekend.

The summer is long gone. Temperatures have started to become much cooler and the evenings are beginning to get darker. Fallen leaves have carpeted driveways, lawns, pathways and sidewalks and there's a fresh earthy scent in the ear. Halloween of 2005 is just days away. People are watching horror movies and thinking about which costume they are going to wear. Others are organizing parties.

In America, the song Gold Digger by Kanye West & Jamie Foxx is on top of the singles charts. Over in the UK, Push The Button by Sugababes is the number one hit song. George W. Bush Jnr. is currently the President of the United States and the movie Saw II is at the top of the Box Office.

It's 2005, so the music charts are being dominated by the likes of Mariah Carey, Gwen Stefani, Mario, Kelly Clarkson, 50 Cent, Kanye West and Ciara. Satirical factoids about actor Chuck Norris are extremely popular at the moment. These "Chuck Norris Facts" consist of absurd hyperbolic claims about Norris' toughness. If you were to travel back to this day, notable figures such as Eddie Guerrero, George Best, Richard Pryor and John Spencer would all be still alive.

On TV, people are watching popular shows such as "Malcolm in the Middle", "CSI: Miami", "Desperate Housewives" and "How I Met Your Mother". Meanwhile, gamers are playing titles such as "RollerCoaster Tycoon 3", "Brothers in Arms: Road to Hill 30", "Guild Wars" and "Shadow of the Colossus". Kids and teenagers are watching TV shows such as "Drake & Josh", "Unfabulous", "Go, Diego, Go!" and "Johnny Test".

If you're a kid or a teenager, then you're probably playing with toys such as Betty Spaghetty (doll), the Xbox, Yu-Gi-Oh! Trading Card Game and Beyblades (spinning top toys).

If you are looking for some childhood nostalgia, then check out October 28th, 2011 instead.

George W. Bush Jnr. was the President of the United States on October 28th, 2005.

Tony Blair was the Prime Minister of the United Kingdom on October 28th, 2005.

Enter your date of birth below to find out how old you were on October 28th, 2005.

Here are some fun statistics about October 28th, 2005.