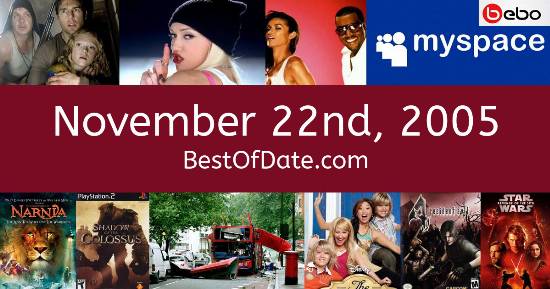 These songs were on top of the music charts in the United States and the United Kingdom on November 22nd, 2005.

The top "Box Office" movie on this date was the film "Chicken Little".

The date is November 22nd, 2005, and it's a Tuesday. Anyone born today will have the star sign Sagittarius. In America, Thanksgiven Day of 2005 is just around the corner.

It's November, so the evenings are getting darker and the days are getting colder. In America, the song Gold Digger by Kanye West & Jamie Foxx is on top of the singles charts. Over in the UK, Hung Up by Madonna is the number one hit song.

If you were to travel back to this day, notable figures such as George Best, Richard Pryor, John Spencer and Chris Penn would all be still alive. On TV, people are watching popular shows such as "Last of the Summer Wine", "Charmed", "Two and a Half Men" and "Pimp My Ride". Meanwhile, gamers are playing titles such as "Battlefield 2", "F.E.A.R.", "Civilization IV" and "Mario Kart DS".

Children and teenagers are currently watching television shows such as "7th Heaven", "Grizzly Tales for Gruesome Kids", "The Fairly OddParents" and "Johnny Test". If you're a kid or a teenager, then you're probably playing with toys such as Betty Spaghetty (doll), Bratz dolls, Beyblades (spinning top toys) and VideoNow (portable player).

These are trending news stories and fads that were prevalent at this time. These are topics that would have been in the media on November 22nd, 2005.

Check out our personality summary for people who were born on November 22nd, 2005.

If you are looking for some childhood nostalgia, then you should check out November 22nd, 2011 instead.

George W. Bush Jnr. was the President of the United States on November 22nd, 2005.

Enter your date of birth below to find out how old you were on November 22nd, 2005.
This information is not transmitted to our server.

Here are some fun statistics about November 22nd, 2005.