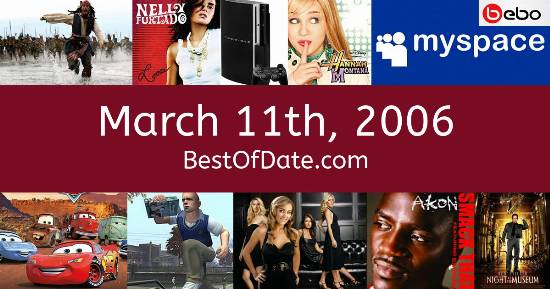 Songs that were on top of the music singles charts in the USA and the United Kingdom on March 11th, 2006.

The date is March 11th, 2006 and it's a Saturday. Anyone born today will have the star sign Pisces. Currently, people are enjoying their weekend.

Spring has started to creep in and the days are beginning to get longer. In America, the song You're Beautiful by James Blunt is on top of the singles charts. Over in the UK, It's Chico Time by Chico is the number one hit song.

George W. Bush Jnr. is currently the President of the United States and the movie Failure to Launch is at the top of the Box Office. In the United Kingdom, Tony Blair is the current Prime Minister. Internet users are using MSN Messenger to chat with each other online.

Practically every teenager and adult has a MySpace or a Bebo account. It's 2006, so the music charts are being dominated by the likes of Daniel Powter, Sean Paul, Nelly Furtado, James Blunt, Gnarls Barkley, Shakira and Natasha Bedingfield. On TV, people are watching popular shows such as "The Sopranos", "Alias", "The Shield" and "Deadwood".

Meanwhile, gamers are playing titles such as "God of War", "Battlefield 2", "F.E.A.R." and "Black". Kids and teenagers are watching TV shows such as "That '70s Show", "LazyTown", "Unfabulous" and "Ben 10". Popular toys at the moment include the likes of the PlayStation 2, the PSP and the Xbox 360.

Celebrities, historical figures and notable people who were born on the 11th of March.

Tony Blair was the Prime Minister of the United Kingdom on March 11th, 2006.

Enter your date of birth below to find out how old you were on March 11th, 2006.

Leave a comment and tell everyone why March 11th, 2006 is important to you.