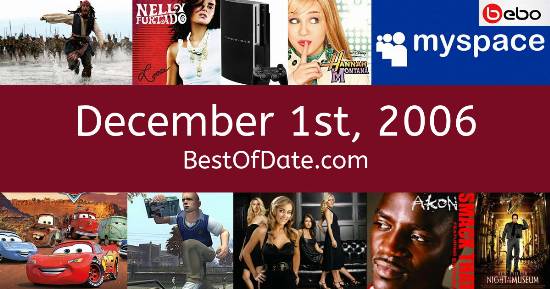 Songs that were on top of the music singles charts in the USA and the United Kingdom on December 1st, 2006.

The date is December 1st, 2006 and it's a Friday. Anyone born today will have the star sign Sagittarius. Currently, people have "that Friday feeling" and are looking forward to the weekend.

In America, the song I Wanna Love You by Akon is on top of the singles charts. Over in the UK, Patience by Take That is the number one hit song. George W. Bush Jnr. is currently the President of the United States and the movie Happy Feet is at the top of the Box Office.

A rock music genre called "Emo" is extremely popular at the moment. The genre, which stands for "emotional hardcore", has created a subculture of "Emos" who dye their hair black and wear thick frame glasses. On TV, people are watching popular shows such as "That's So Raven", "Punk'd", "Battlestar Galactica" and "The Office". Meanwhile, gamers are playing titles such as "The Elder Scrolls IV: Oblivion", "Dead Rising", "Saints Row" and "Marvel: Ultimate Alliance".

Children and teenagers are currently watching television shows such as "Dora the Explorer", "Drake & Josh", "Unfabulous" and "The Hills". If you're a kid or a teenager, then you're probably playing with toys such as the PSP, the Xbox 360, the PlayStation 3 and the Nintendo Wii.

A Spotify playlist of hit songs from 2006. Take a trip back to the peak days of Shakira, Sean Paul, Justin Timberlake, Gnarls Barkley and Beyoncé.

George W. Bush Jnr. was the President of the United States on December 1st, 2006.

Tony Blair was the Prime Minister of the United Kingdom on December 1st, 2006.

Enter your date of birth below to find out how old you were on December 1st, 2006.

Here are some fun statistics about December 1st, 2006.

Leave a comment and tell everyone why December 1st, 2006 is important to you.