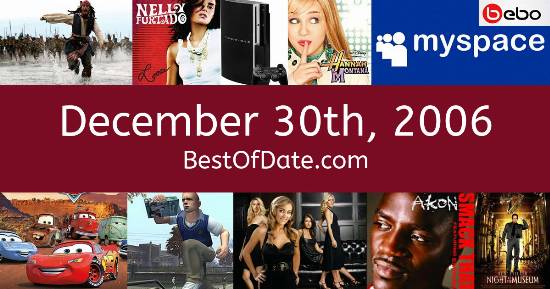 Songs that were on top of the music singles charts in the USA and the United Kingdom on December 30th, 2006.

The date is December 30th, 2006 and it's a Saturday. Anyone born today will have the star sign Capricorn. Currently, people are enjoying their weekend.

Christmas Day of 2006 has just passed and many people are relaxing at home and enjoying the holiday season. In America, the song Irreplaceable by Beyonce is on top of the singles charts. Over in the UK, A Moment Like This by Leona Lewis is the number one hit song.

George W. Bush Jnr. is currently the President of the United States and the movie Night at the Museum is at the top of the Box Office. In the United Kingdom, Tony Blair is the current Prime Minister. Cameras on phones have become the norm. Furthermore, the quality of these cameras are continuing to increase with each new phone release. We are now entering into an age where any event can be photographed or recorded in an instance.

If you were to travel back to this day, notable figures such as Bam Bam Bigelow, Anna Nicole Smith, Eddie Griffin and Luciano Pavarotti would all be still alive. On TV, people are watching popular shows such as "King of the Hill", "Stargate Atlantis", "Desperate Housewives" and "Grey's Anatomy". Meanwhile, gamers are playing titles such as "The Elder Scrolls IV: Oblivion", "Saints Row", "Just Cause" and "Marvel: Ultimate Alliance".

Kids and teenagers are watching TV shows such as "7th Heaven", "SpongeBob SquarePants", "Peppa Pig" and "Unfabulous". Popular toys at the moment include the likes of the PSP, the Xbox 360, the PlayStation 3 and the Nintendo Wii.

If you are looking for some childhood nostalgia, then check out December 30th, 2012 instead.

George W. Bush Jnr. was the President of the United States on December 30th, 2006.

Tony Blair was the Prime Minister of the United Kingdom on December 30th, 2006.

Enter your date of birth below to find out how old you were on December 30th, 2006.

Here are some fun statistics about December 30th, 2006.