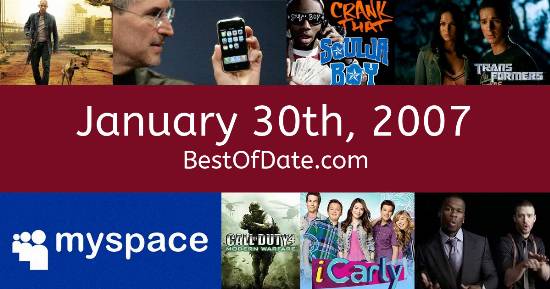 On January 30th, 2007, the following songs were at the top of the music charts in the USA and the UK.

The top "Box Office" movie on this date was the film "Epic Movie".

The date is January 30th, 2007, and it's a Tuesday. Anyone born today will have the star sign Aquarius. In America, the song Irreplaceable by Beyonce is on top of the singles charts.

Over in the UK, Grace Kelly by Mika is the number one hit song. George W. Bush Jnr. is currently the President of the United States, and the movie Epic Movie is at the top of the Box Office. In the United Kingdom, Tony Blair is the current Prime Minister.

It's 2007, so the music charts are being dominated by the likes of Beyoncé, Rihanna, Jay-Z, Sean Kingston, Soulja Boy and Nelly Furtado. If you were to travel back to this day, notable figures such as Anna Nicole Smith, Eddie Griffin, Luciano Pavarotti and Colin McRae would all be still alive. On TV, people are watching popular shows such as "7th Heaven", "Battlestar Galactica", "Prison Break" and "Bones".

Meanwhile, gamers are playing titles such as "Dead Rising", "Battlefield 2142", "Marvel: Ultimate Alliance" and "The Legend of Zelda: Twilight Princess". Children and teenagers are currently watching television shows such as "Go, Diego, Go!", "Everybody Hates Chris", "Hannah Montana" and "Horrid Henry". Popular toys at the moment include the likes of VideoNow (portable player), the Xbox 360, the Nintendo Wii and Iggle Piggle.

These are trending news stories and fads that were prevalent at this time. These are topics that would have been in the media on January 30th, 2007.

Check out our personality summary for people who were born on January 30th, 2007.

Television shows that people were watching in January, 2007.

Popular video games that people were playing in January of 2007.

If you are looking for some childhood nostalgia, then you should check out January 30th, 2013 instead.

George W. Bush Jnr. was the President of the United States on January 30th, 2007.

Tony Blair was the Prime Minister of the United Kingdom on January 30th, 2007.

Enter your date of birth below to find out how old you were on January 30th, 2007.
This information is not transmitted to our server.

Here are some fun statistics about January 30th, 2007.