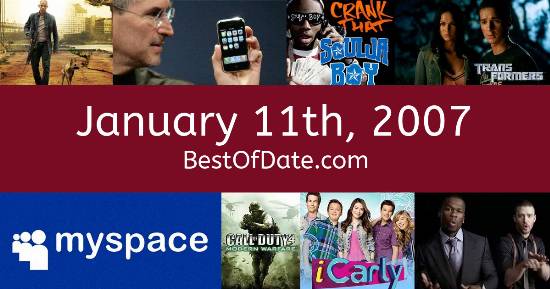 Songs that were on top of the music singles charts in the USA and the United Kingdom on January 11th, 2007.

The date is January 11th, 2007 and it's a Thursday. Anyone born today will have the star sign Capricorn. The Christmas holiday season is long over, the decorations have been taken down and a sense of normality has returned.

In America, the song Irreplaceable by Beyonce is on top of the singles charts. Over in the UK, A Moment Like This by Leona Lewis is the number one hit song. George W. Bush Jnr. is currently the President of the United States and the movie Night at the Museum is at the top of the Box Office.

Meanwhile, in technology news, more and more people are beginning to use the Internet on their phones. This transition towards mobile Internet has been aided by the recent roll-out of faster 3G networks and the introduction of larger touchscreen phones. It's 2007, so the music charts are being dominated by the likes of Beyoncé, Rihanna, Jay-Z, Sean Kingston, Soulja Boy and Nelly Furtado. On TV, people are watching popular shows such as "Smallville", "Without a Trace", "Stargate Atlantis" and "It's Always Sunny in Philadelphia".

Meanwhile, gamers are playing titles such as "Tom Clancy's Ghost Recon Advanced Warfighter", "The Godfather", "Battlefield 2142" and "Marvel: Ultimate Alliance". Children and teenagers are currently watching television shows such as "Ed, Edd n Eddy", "Peppa Pig", "The Suite Life of Zack & Cody" and "The Hills". If you're a kid or a teenager, then you're probably playing with toys such as the Xbox 360, the PlayStation 3, the Nintendo Wii and Iggle Piggle.

If you are looking for some childhood nostalgia, then check out January 11th, 2013 instead.

George W. Bush Jnr. was the President of the United States on January 11th, 2007.

Tony Blair was the Prime Minister of the United Kingdom on January 11th, 2007.

Enter your date of birth below to find out how old you were on January 11th, 2007.

Here are some fun statistics about January 11th, 2007.