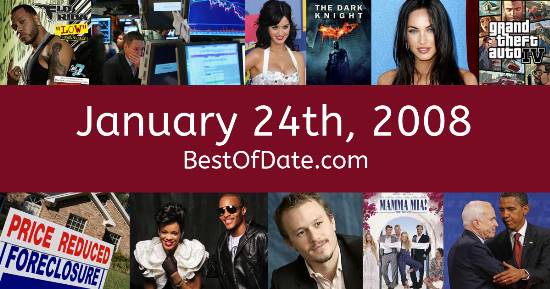 On January 24th, 2008, the following songs were at the top of the music charts in the USA and the UK.

The top "Box Office" movie on this date was the film "Cloverfield".

The date is January 24th, 2008, and it's a Thursday. Anyone born today will have the star sign Aquarius. In America, the song Low by Flo-Rida & T-Pain is on top of the singles charts.

Over in the UK, Now You're Gone by Basshunter is the number one hit song. George W. Bush Jnr. is currently the President of the United States, and the movie Cloverfield is at the top of the Box Office. In the United Kingdom, Gordon Brown is the current Prime Minister.

If you were to travel back to this day, notable figures such as George Carlin, Bernie Mac, John Costelloe and Test would all be still alive. On TV, people are watching popular shows such as "Battlestar Galactica", "Prison Break", "Friday Night Lights" and "Mad Men". Meanwhile, gamers are playing titles such as "Halo 3", "Guitar Hero III: Legends of Rock", "Call of Duty 4: Modern Warfare" and "Mass Effect".

Kids and teenagers are watching TV shows such as "Ed, Edd n Eddy", "Dora the Explorer", "The Fairly OddParents" and "Ben 10". Popular toys at the moment include the likes of the Xbox 360, the PlayStation 3, Iggle Piggle and iPod Touch.

These are trending news stories and fads that were prevalent at this time. These are topics that would have been in the media on January 24th, 2008.

Check out our personality summary for people who were born on January 24th, 2008.

Television shows that people were watching in January, 2008.

Popular video games that people were playing in January of 2008.

If you are looking for some childhood nostalgia, then you should check out January 24th, 2014, instead.

George W. Bush Jnr. was the President of the United States on January 24th, 2008.

Enter your date of birth below to find out how old you were on January 24th, 2008.
This information is not transmitted to our server.

Here are some fun statistics about January 24th, 2008.