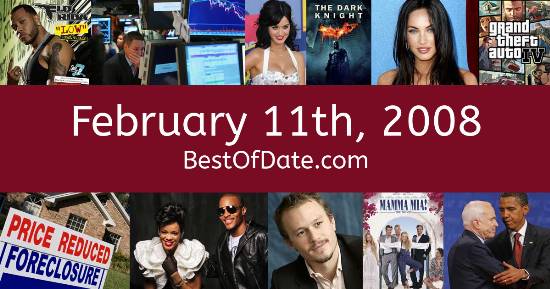 Songs that were on top of the music singles charts in the USA and the United Kingdom on February 11th, 2008.

The date is February 11th, 2008 and it's a Monday. Anyone born today will have the star sign Aquarius. Valentine's Day is just around the corner.

In America, the song Low by Flo-Rida & T-Pain is on top of the singles charts. Over in the UK, Now You're Gone by Basshunter is the number one hit song. George W. Bush Jnr. is currently the President of the United States and the movie Fool's Gold is at the top of the Box Office.

A social network called Facebook is beginning to surge in popularity, replacing the likes of MySpace. It's 2008, so the music charts are filled with artists such as Flo Rida, Katy Perry, Rihanna and T.I. On TV, people are watching popular shows such as "Stargate SG-1", "24", "Two and a Half Men" and "Lost".

Meanwhile, gamers are playing titles such as "Halo 3", "Team Fortress 2", "Call of Duty 4: Modern Warfare" and "Assassin's Creed". Kids and teenagers are watching TV shows such as "The Fairly OddParents", "Ben 10", "Curious George" and "iCarly". Popular toys at the moment include the likes of the Xbox 360, the PlayStation 3 and iPod Touch.

Celebrities, historical figures and notable people who were born on the 11th of February.

George W. Bush Jnr. was the President of the United States on February 11th, 2008.

Gordon Brown was the Prime Minister of the United Kingdom on February 11th, 2008.

Enter your date of birth below to find out how old you were on February 11th, 2008.

Here are some fun statistics about February 11th, 2008.

Leave a comment and tell everyone why February 11th, 2008 is important to you.