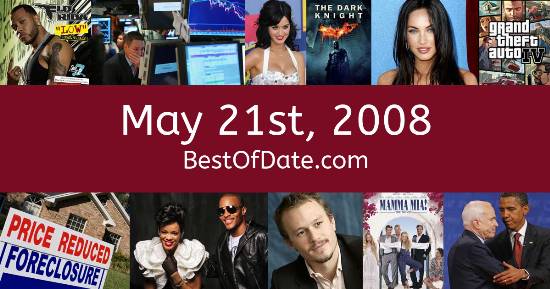 Songs that were on top of the music singles charts in the USA and the United Kingdom on May 21st, 2008.

The movie "The Chronicles of Narnia: Prince Caspian" was at the top of the box office on May 21st, 2008.

The date is May 21st, 2008 and it's a Wednesday. Anyone born today will have the star sign Gemini. The summer of 2008 has finally arrived. The weather has warmed up and the evenings are brighter than usual.

In America, the song Take A Bow by Rihanna is on top of the singles charts. Over in the UK, That's Not My Name by Ting Tings is the number one hit song. George W. Bush Jnr. is currently the President of the United States and the movie The Chronicles of Narnia: Prince Caspian is at the top of the Box Office.

A social network called Facebook is beginning to surge in popularity, replacing the likes of MySpace. It's 2008, so the music charts are filled with artists such as Flo Rida, Katy Perry, Rihanna and T.I. On TV, people are watching popular shows such as "Last of the Summer Wine", "Extreme Makeover: Home Edition", "Desperate Housewives" and "The Office".

Meanwhile, gamers are playing titles such as "Team Fortress 2", "Call of Duty 4: Modern Warfare", "Uncharted: Drake's Fortune" and "Grand Theft Auto IV". Children and teenagers are currently watching television shows such as "The Suite Life of Zack & Cody", "Go, Diego, Go!", "iCarly" and "Wizards of Waverly Place". Popular toys at the moment include the likes of the Xbox 360, the PlayStation 3 and iPod Touch.

Notable events that occurred around May 21st, 2008.

Historical weather information for May 21st, 2008.

Gordon Brown was the Prime Minister of the United Kingdom on May 21st, 2008.

Leave a comment and tell everyone why May 21st, 2008 is important to you.