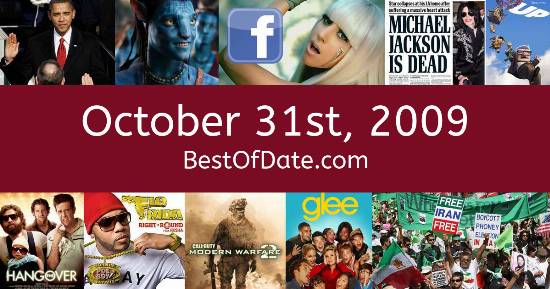 Songs that were on top of the music singles charts in the USA and the United Kingdom on October 31st, 2009.

The date is October 31st, 2009 and it's a Saturday. Anyone born today will have the star sign Scorpio. Currently, people are enjoying their weekend.

In America, the song Down by Jay Sean ft Lil Wayne is on top of the singles charts. Over in the UK, Fight For This Love by Cheryl Cole is the number one hit song. Barack Obama is currently the President of the United States and the movie Michael Jackson's This Is It is at the top of the Box Office.

It's 2009, so the music charts are filled with artists such as The Black Eyed Peas, Lady Gaga, Flo Rida, Taylor Swift and T.I. The term "hipster" is currently growing in use. The word is being used to describe people who are pretentious and deliberately anti-mainstream. Meanwhile, gaming fans are currently excited about the upcoming release of Call of Duty: Modern Warfare 2.

On TV, people are watching popular shows such as "Two and a Half Men", "CSI: NY", "Real Housewives of New York City" and "Glee". Meanwhile, gamers are playing titles such as "Mafia Wars", "Mirror's Edge", "Batman: Arkham Asylum" and "Halo 3: ODST". Children and teenagers are currently watching television shows such as "Dora the Explorer", "Hannah Montana", "The Hills" and "Glee".

Popular toys at the moment include the likes of the Xbox 360, the PlayStation 3, WALL-E toys and ZhuZhu Pets.

A Spotify playlist of hit songs from 2009. Take a trip back to the peak days of the Black Eyed Peas, Lady Gaga, Flo Rida and Tinchy Stryder.

Celebrities, historical figures and notable people who were born on the 31st of October.

Barack Obama was the President of the United States on October 31st, 2009.

Gordon Brown was the Prime Minister of the United Kingdom on October 31st, 2009.

Enter your date of birth below to find out how old you were on October 31st, 2009.

Here are some fun statistics about October 31st, 2009.

Leave a comment and tell everyone why October 31st, 2009 is important to you.