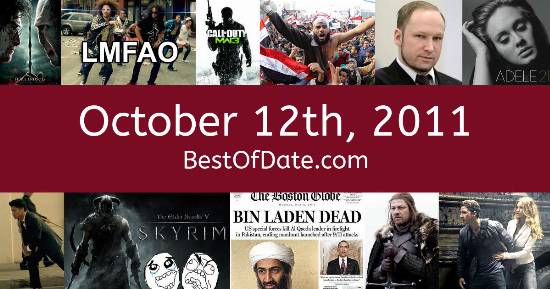 Songs that were on top of the music singles charts in the USA and the United Kingdom on October 12th, 2011:

The date is October 12th, 2011 and it's a Wednesday. Anyone born today will have the star sign Libra. The summer is long gone. Temperatures have started to become much cooler and the evenings are beginning to get darker.

Fallen leaves have carpeted driveways, lawns, pathways and sidewalks and there's a fresh earthy scent in the ear. In America, the song Moves Like Jagger by Maroon 5 ft Christina Aguilera is on top of the singles charts. Over in the UK, We Found Love by Rihanna ft Calvin Harris is the number one hit song.

Barack Obama is currently the President of the United States and the movie Dolphin Tale is at the top of the Box Office. In the United Kingdom, David Cameron is the current Prime Minister. The term "hipster" is currently growing in use. The word is being used to describe people who are pretentious and deliberately anti-mainstream.

Pre-made comics called "Rage Comics" are extremely popular on the Internet at the moment, as people use them to share relatable experiences. It's 2011, so the music charts are being dominated by artists such as Adele, LMFAO, Katy Perry and Bruno Mars. A fad called "planking", which involves a person lying face down in an unusual location, is popular at the moment.

Protests in Syria have snowballed and a civil war has started. Armed militias are currently springing up across the country. The catchphrase "We are the 99%" has become popular among those wanting to spread awareness about wealth inequality in America. People are currently posting photographs of themselves holding placards that describe their financial situation. An advertisement video for American taxidermist Chuck Testa has gone viral and Internet users are repeating the catchphrase "Nope! Chuck Testa!"

The 2011 Rugby World Cup is currently taking place in New Zealand. The Occupy Wall Street movement is receiving widespread media attention. A civil war is raging on in Libya. Libyan rebels, with the support of NATO, are now taking over some of Colonel Muammar Gaddafi's final strongholds.

In Kansas City, Missouri, a search is underway for a 10-month-old baby called Lisa Irwin, who disappeared from her home. Tributes are pouring in for Apple co-founder Steve Jobs, who recently passed away after a battle with pancreatic cancer. On TV, people are watching popular shows such as "Futurama", "Two and a Half Men", "Real Housewives of New York City" and "Game of Thrones".

Meanwhile, gamers are playing titles such as "Farmville", "Halo: Reach", "Fallout: New Vegas" and "L.A. Noire". Kids and teenagers are watching TV shows such as "The Fairly OddParents", "Mickey Mouse Clubhouse", "Glee" and "Victorious". Popular toys include the likes of "Xbox 360", "PlayStation 3", "iPad" and "The LeapPad Explorer".

Who was the Prime Minister of the United Kingdom on October 12th, 2011?

Enter your date of birth below to find out how old you were on October 12th, 2011.

Looking for some nostalgia? Here are some Youtube videos relating to October 12th, 2011. Please note that videos are automatically selected by Youtube and that results may vary! Click on the "Load Next Video" button to view the next video in the search playlist. In many cases, you'll find episodes of old TV shows, documentaries, music videos and soap dramas.

Here are some fun statistics about October 12th, 2011.