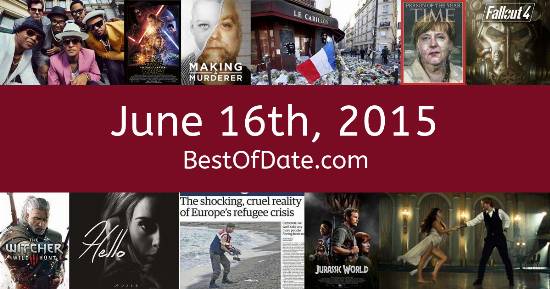 These songs were on top of the music charts in the United States and the United Kingdom on June 16th, 2015.

The movie "Jurassic World" was at the top of the Box Office on this day.

The date is June 16th, 2015, and it's a Tuesday. Anyone born today will have the star sign Gemini. It's summer, so the temperatures are warmer and the evenings are longer than usual.

In America, the song See You Again by Wiz Khalifa featuring Charlie Puth is on top of the singles charts. Over in the UK, Want to Want Me by Jason Derulo is the number one hit song. Barack Obama is currently the President of the United States, and the movie Jurassic World is at the top of the Box Office.

There are cries of censorship on social news aggregation website Reddit after the administrators decide to ban the subreddit /r/fatpeoplehate. Wrestling fans are in mourning following the recent death of WWF legend Dusty Rhodes. The social network Friendster has shut down after 13 years.

In a bizarre turn of events, Rachel Dolezal has stepped down as chapter president of the NAACP following revelations that she is actually white woman who has been identifying and passing as a black woman. The Golden State Warriors have just won the 2015 NBA Finals after defeating the Cleveland Cavaliers 4-2. Billionaire and Reality TV star Donald Trump has recently announced his candidacy for President of the United States.

If you were to travel back to this day, notable figures such as Jules Bianchi, Cilla Black, Jonah Lomu and Lemmy would all be still alive. On TV, people are watching popular shows such as "Prison Break", "Bones", "The Vampire Diaries" and "Suits". Meanwhile, gamers are playing titles such as "Grand Theft Auto V", "Call of Duty: Advanced Warfare", "Assassin's Creed: Unity" and "Resident Evil HD Remaster".

Children and teenagers are currently watching television shows such as "Jessie", "Lab Rats: Bionic Island", "Girl Meets World" and "Henry Danger". If you're a kid or a teenager, then you're probably playing with toys such as Rainbow Loom, the PlayStation 4, the Xbox One and Frozen toys.

These are trending news stories and fads that were prevalent at this time. These are topics that would have been in the media on June 16th, 2015.

Check out our personality summary for people who were born on June 16th, 2015.

Television shows that people were watching in June, 2015.

Popular video games that people were playing in June of 2015.

If you are looking for some childhood nostalgia, then you should check out June 16th, 2021 instead.

Barack Obama was the President of the United States on June 16th, 2015.

David Cameron was the Prime Minister of the United Kingdom on June 16th, 2015.

Enter your date of birth below to find out how old you were on June 16th, 2015.
This information is not transmitted to our server.