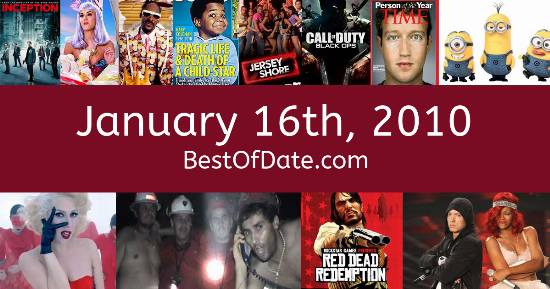 Songs that were on top of the music singles charts in the USA and the United Kingdom on January 16th, 2010:

The date is January 16th, 2010 and it's a Saturday. Anyone born today will have the star sign Capricorn. Currently, people are enjoying their weekend.

In America, the song Tik Tok by Kesha is on top of the singles charts. Over in the UK, Replay by Iyaz is the number one hit song. Barack Obama is currently the President of the United States and the movie Avatar is at the top of the Box Office.

In the United Kingdom, Gordon Brown is the current Prime Minister. The term "hipster" is currently growing in use. The word is being used to describe people who are pretentious and deliberately anti-mainstream. It's 2010, so the music charts are being dominated by artists such as Kesha, Katy Perry, Rihanna, Eminem and Bruno Mars.

A catastrophic earthquake has struck Haiti, leaving hundreds of thousands of people dead. In response, many countries are pledging humanitarian aid, rescue teams and relief funds. The search for survivors is ongoing. On TV, people are watching popular shows such as "Two and a Half Men", "CSI: NY", "Desperate Housewives" and "The Vampire Diaries". Meanwhile, gamers are playing titles such as "Mafia Wars", "Farmville", "Batman: Arkham Asylum" and "Halo 3: ODST".

Children and teenagers are currently watching television shows such as "Dora the Explorer", "Hannah Montana", "Wizards of Waverly Place" and "Sonny with a Chance". If you're a kid or a teenager, then you're probably playing with toys such as "Xbox 360", "PlayStation 3" and "ZhuZhu Pets".

Who was the Prime Minister of the United Kingdom on January 16th, 2010?

Enter your date of birth below to find out how old you were on January 16th, 2010.

Looking for some nostalgia? Here are some Youtube videos relating to January 16th, 2010. Please note that videos are automatically selected by Youtube and that results may vary! Click on the "Load Next Video" button to view the next video in the search playlist. In many cases, you'll find episodes of old TV shows, documentaries, music videos and soap dramas.

Here are some fun statistics about January 16th, 2010.