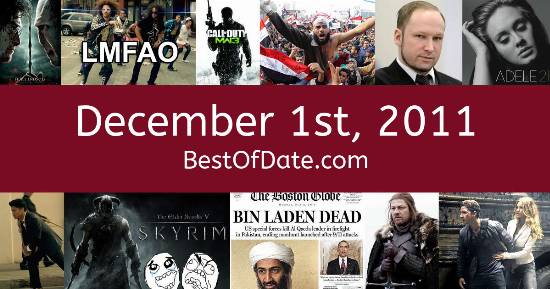 Songs that were on top of the music singles charts in the USA and the United Kingdom on December 1st, 2011.

The movie "Immortals" was at the top of the box office on December 1st, 2011.

The date is December 1st, 2011 and it's a Thursday. Anyone born today will have the star sign Sagittarius. The song We Found Love by Rihanna ft Calvin Harris is on top of the singles charts in both the USA and the United Kingdom.

Barack Obama is currently the President of the United States and the movie Immortals is at the top of the Box Office. In the United Kingdom, David Cameron is the current Prime Minister. Pre-made comics called "Rage Comics" are extremely popular on the Internet at the moment, as people use them to share relatable experiences.

The slang phrase "YOLO" is continuing to rise in usage. In his song "The Motto", rapper Drake has further popularized the acronym, which stands for "You only live once." Soccer fans are in shock following the recent suicide of Gary Speed. On TV, people are watching popular shows such as "Prison Break", "Bones", "Modern Family" and "Homeland".

Meanwhile, gamers are playing titles such as "Civilization V", "Portal 2", "Gears of War 3" and "Batman: Arkham City". Kids and teenagers are watching TV shows such as "LazyTown", "Phineas and Ferb", "iCarly" and "Good Luck Charlie". If you're a kid or a teenager, then you're probably playing with toys such as the Xbox 360, the PlayStation 3, the iPad and the LeapPad Explorer.

Barack Obama was the President of the United States on December 1st, 2011.

David Cameron was the Prime Minister of the United Kingdom on December 1st, 2011.

Enter your date of birth below to find out how old you were on December 1st, 2011.

Here are some fun statistics about December 1st, 2011.

Leave a comment and tell everyone why December 1st, 2011 is important to you.