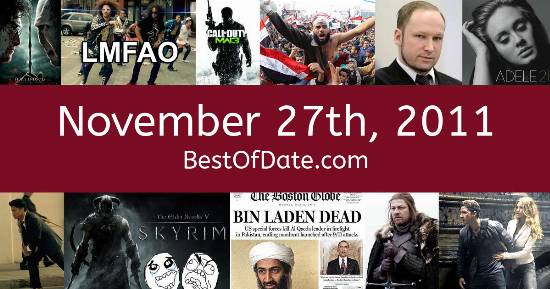 Songs that were on top of the music singles charts in the USA and the United Kingdom on November 27th, 2011.

The date is November 27th, 2011 and it's a Sunday. Anyone born today will have the star sign Sagittarius. Currently, people are enjoying their weekend.

In America, Thanksgiven Day and Black Friday have recently come and passed. People are now beginning to look forward to Christmas. It's November, so the evenings are getting darker and the days are getting colder. The song We Found Love by Rihanna ft Calvin Harris is on top of the singles charts in both the USA and the United Kingdom.

Barack Obama is currently the President of the United States and the movie Immortals is at the top of the Box Office. In the United Kingdom, David Cameron is the current Prime Minister. Video rental stores such as Blockbuster are continuing to close their doors at the moment. This is due to the increasing popularity of online streaming services such as Netflix and Hulu.

Pre-made comics called "Rage Comics" are extremely popular on the Internet at the moment, as people use them to share relatable experiences. It's 2011, so the music charts are being dominated by artists such as Adele, Maroon 5, LMFAO, Katy Perry, Rihanna and Bruno Mars. A fad called "planking", which involves a person lying face down in an unusual location, is popular at the moment.

Meanwhile, in the Middle East, protests in Syria have snowballed and a civil war has started. Armed militias are currently springing up across the country. The FPS game "Call of Duty: Modern Warfare 3" has just been released by Infinity Ward. Meanwhile, "The Elder Scrolls V: Skyrim" has been released by Bethesda. A Skyrim meme called "I took an arrow to the knee" is currently doing its rounds on websites such as Youtube and Reddit.

A new sandbox game called "Minecraft" has just been released for the PC. A new meme format called "[10] guy" is currently being used to poke fun at how people think and act while they are stoned. The slang phrase YOLO (You only live once) was beginning to rise in popularity at this time.

Soccer fans are in shock following the recent suicide of Gary Speed. On TV, people are watching popular shows such as "House", "The Office", "RuPaul's Drag Race" and "Game of Thrones". Meanwhile, gamers are playing titles such as "Homefront", "Crysis 2", "Batman: Arkham City" and "Battlefield 3".

Children and teenagers are currently watching television shows such as "Peppa Pig", "Mickey Mouse Clubhouse", "Curious George" and "iCarly". If you're a kid or a teenager, then you're probably playing with toys such as the Xbox 360, the PlayStation 3, the iPad and the LeapPad Explorer.

If you are looking for some childhood nostalgia, then check out November 27th, 2017 instead.

Barack Obama was the President of the United States on November 27th, 2011.

David Cameron was the Prime Minister of the United Kingdom on November 27th, 2011.

Enter your date of birth below to find out how old you were on November 27th, 2011.

Here are some fun statistics about November 27th, 2011.