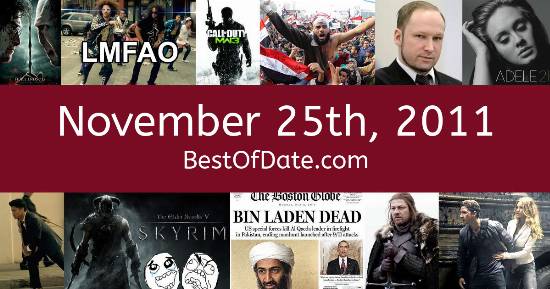 Songs that were on top of the music singles charts in the USA and the United Kingdom on November 25th, 2011.

The date is November 25th, 2011 and it's a Friday. Anyone born today will have the star sign Sagittarius. Currently, people have "that Friday feeling" and are looking forward to the weekend.

The song We Found Love by Rihanna ft Calvin Harris is on top of the singles charts in both the USA and the United Kingdom. Barack Obama is currently the President of the United States and the movie Immortals is at the top of the Box Office. In the United Kingdom, David Cameron is the current Prime Minister.

A fad called "planking", which involves a person lying face down in an unusual location, is popular at the moment. Meanwhile, in the Middle East, protests in Syria have snowballed and a civil war has started. Armed militias are currently springing up across the country. The FPS game "Call of Duty: Modern Warfare 3" has just been released by Infinity Ward. Meanwhile, "The Elder Scrolls V: Skyrim" has been released by Bethesda.

The slang phrase YOLO (You only live once) was beginning to rise in popularity at this time. If you were to travel back to this day, notable figures such as Gary Speed, Christopher Hitchens, Whitney Houston and Edd Gould would all be still alive. On TV, people are watching popular shows such as "Sons of Anarchy", "Modern Family", "White Collar" and "Game of Thrones".

Meanwhile, gamers are playing titles such as "Total War: Shogun 2", "Terraria", "Call of Duty: Modern Warfare 3" and "Minecraft". Children and teenagers are currently watching television shows such as "LazyTown", "Ben 10", "Phineas and Ferb" and "Wizards of Waverly Place". If you're a kid or a teenager, then you're probably playing with toys such as the Xbox 360, the PlayStation 3, the KidiZoom Camera and the iPad.

If you are looking for some childhood nostalgia, then check out November 25th, 2017 instead.

Barack Obama was the President of the United States on November 25th, 2011.

David Cameron was the Prime Minister of the United Kingdom on November 25th, 2011.

Enter your date of birth below to find out how old you were on November 25th, 2011.

Here are some fun statistics about November 25th, 2011.