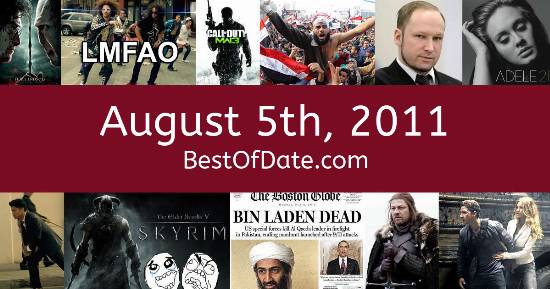 Songs that were on top of the music singles charts in the USA and the United Kingdom on August 5th, 2011.

The date is August 5th, 2011, and it's a Friday. Anyone born today will have the star sign Leo. Currently, people have "that Friday feeling" and are looking forward to the weekend.

It's summer, so the temperatures are warmer and the evenings are longer than usual. In America, the song Party Rock Anthem by LMFAO is on top of the singles charts. Over in the UK, She Makes Me Wanna by JLS is the number one hit song.

Barack Obama is currently the President of the United States, and the movie Cowboys & Aliens is at the top of the Box Office. In the United Kingdom, David Cameron is the current Prime Minister. The term "hipster" is currently growing in use. The word is being used to describe people who are pretentious and deliberately anti-mainstream.

A civil war is raging on in Libya. Large battles are taking place between Colonel Gaddafi's government forces and Libyan rebels, who are being supported by NATO. A fad called "planking", which involves a person lying face down in an unusual location, is popular at the moment. An Advice Animal meme called "Good Guy Greg" is beginning to take off in popularity.

Google have just launched their new social network "Google+" and people are wondering if it can challenge Facebook for the top spot. Meanwhile, in the Middle East, protests in Syria have snowballed and a civil war has started. Armed militias are currently springing up across the country. Internet personality "Zyzz" has passed away after suffering a heart attack while on holiday in Thailand.

If you were to travel back to this day, notable figures such as Zyzz, Steve Jobs, Joe Frazier and Heavy D would all be still alive. On TV, people are watching popular shows such as "The Royle Family", "CSI: NY", "Bones" and "White Collar". Meanwhile, gamers are playing titles such as "Super Meat Boy", "Dead Space 2", "Duke Nukem Forever" and "Terraria".

Kids and teenagers are watching TV shows such as "Johnny Test", "Horrid Henry", "Wizards of Waverly Place" and "Team Umizoomi". If you're a kid or a teenager, then you're probably playing with toys such as the Xbox 360, the PlayStation 3, the KidiZoom Camera and ZhuZhu Pets.

These are trending news stories and fads that were prevalent at this time. These are topics that would have been in the media on August 5th, 2011.

News stories and other events that happened around August 5th, 2011.

Check out our personality summary for people who were born on August 5th, 2011.

Television shows that people were watching in August, 2011.

Popular video games that people were playing in August of 2011.

If you are looking for some childhood nostalgia, then you should check out August 5th, 2017 instead.

Barack Obama was the President of the United States on August 5th, 2011.

David Cameron was the Prime Minister of the United Kingdom on August 5th, 2011.

Find out what your age was on August 5th, 2011, by entering your DOB below.
This information is not saved on our server.

Here are some fun statistics about August 5th, 2011.