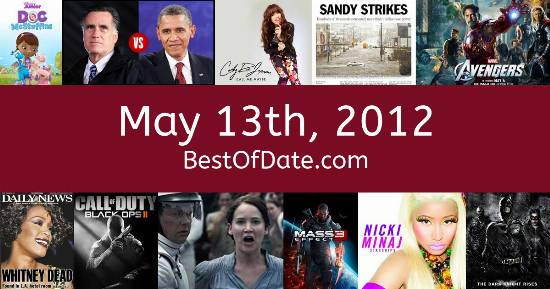 Songs that were on top of the music singles charts in the USA and the United Kingdom on May 13th, 2012.

"I swear, you'll never see anything like this ever again!" I think every football fan remembers that last-minute goal from Aguero. Unreal.
Posted on May 13th, 2022 03:10

The date is May 13th, 2012 and it's a Sunday. Anyone born today will have the star sign Taurus. Currently, people are enjoying their weekend.

The summer of 2012 has finally arrived. The weather has warmed up and the evenings are brighter than usual. In America, the song Somebody That I Used To Know by Gitye ft Kimbra is on top of the singles charts. Over in the UK, Young by Tulisa is the number one hit song.

Barack Obama is currently the President of the United States and the movie Think Like a Man is at the top of the Box Office. In the United Kingdom, David Cameron is the current Prime Minister. Video rental stores such as Blockbuster are continuing to close their doors at the moment. This is due to the increasing popularity of online streaming services such as Netflix and Hulu.

A video of Oklahoma City resident Kimberly Wilkins saying "Ain't Nobody Got Time for That" during an interview with a local news station is currently going viral. The interview has sparked the creation of several memes and music remixes over the past couple of weeks. The hit song "Call Me Maybe" by Carly Rae Jepsen is currently the subject of a number of parody and lip dub videos. Jermaine Paul has just won the second season of The Voice.

A masseur is currently suing John Travolta and alleging that the actor inappropriately touched him. The popular game Minecraft has just been released on the Xbox 360. In soccer, Manchester City have won their first Premier League title after dramatically scoring two late goals against Queens Park Rangers in the final game.

If you were to travel back to this day, notable figures such as Rodney King, Sherman Hemsley, Neil Armstrong and Michael Clarke Duncan would all be still alive. On TV, people are watching popular shows such as "Futurama", "Dexter", "Mad Men" and "Modern Family". Meanwhile, gamers are playing titles such as "The Legend of Zelda: Ocarina of Time 3D", "Saints Row: The Third", "DayZ (mod)" and "Journey".

Kids and teenagers are watching TV shows such as "Horrid Henry", "Phineas and Ferb", "Team Umizoomi" and "Austin & Ally". If you're a kid or a teenager, then you're probably playing with toys such as the Xbox 360, the PlayStation 3, the KidiZoom Camera and Skylanders Giants figures.

Notable events that occurred around May 13th, 2012.

If you are looking for some childhood nostalgia, then check out May 13th, 2018 instead.

Historical weather information for May 13th, 2012.

Barack Obama was the President of the United States on May 13th, 2012.

David Cameron was the Prime Minister of the United Kingdom on May 13th, 2012.