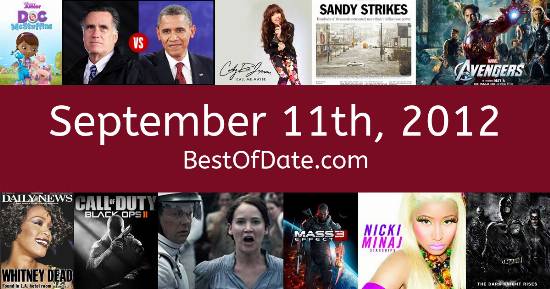 These songs were on top of the music charts in the United States and the United Kingdom on September 11th, 2012.

The movie "The Possession" was at the top of the Box Office on this day.

The date is September 11th, 2012, and it's a Tuesday. Anyone born today will have the star sign Virgo. Schools and colleges are starting again and Autumn has officially arrived. As a result, temperatures are beginning to cool and trees are starting to shed their leaves.

In America, the song Whistle by Flo Rida is on top of the singles charts. Over in the UK, Let Me Love You by Ne-Yo is the number one hit song. Barack Obama is currently the President of the United States, and the movie The Possession is at the top of the Box Office.

It's 2012, so the music charts are being dominated by artists such as Carly Rae Jepsen, Gotye, Flo Rida, LMFAO and Ellie Goulding. Meanwhile, a new photo-sharing app called Instagram is currently surging in popularity. In music news, a new song called "Gangnam Style" by South Korean singer Psy is currently going viral at the moment.

The run-up to the 2012 United States presidential election is currently taking place, as President Barack Obama goes up against Republican nominee Mitt Romney. The music video "We Found Love", by Rihanna featuring Calvin Harris, has just won "Video of the Year" at the 2012 MTV VMA awards. U.S. Ambassador J. Christopher Stevens and others have been killed following an attack on the U.S. embassy in Benghazi, Libya.

An anti-Islam film called the "Innocence of Muslims" is currently causing controversy. As a result, anti-American protests have sprung up in several countries around the middle east. If you were to travel back to this day, notable figures such as Johnny Lewis, Aaron Swartz, Robert F. Chew and Chris Kyle would all be still alive. On TV, people are watching popular shows such as "The Royle Family", "Gossip Girl", "Suits" and "Once Upon a Time".

Meanwhile, gamers are playing titles such as "Terraria", "Batman: Arkham City", "Call of Duty: Modern Warfare 3" and "Minecraft". Kids and teenagers are watching TV shows such as "Mickey Mouse Clubhouse", "Phineas and Ferb", "Glee" and "Jake and the Never Land Pirates". If you're a kid or a teenager, then you're probably playing with toys such as the Xbox 360, the KidiZoom Camera, the LeapPad Explorer and Skylanders Giants figures.

These are trending news stories and fads that were prevalent at this time. These are topics that would have been in the media on September 11th, 2012.

News stories and other events that happened around September 11th, 2012.

Check out our personality summary for people who were born on September 11th, 2012.

Television shows that people were watching in September, 2012.

Popular video games that people were playing in September of 2012.

If you are looking for some childhood nostalgia, then you should check out September 11th, 2018 instead.

NFL coach. Deceased
Born on September 11th, 1924
He was not alive on this date.

Barack Obama was the President of the United States on September 11th, 2012.

David Cameron was the Prime Minister of the United Kingdom on September 11th, 2012.

Find out what your age was on September 11th, 2012, by entering your DOB below.
This information is not saved on our server.

Here are some fun statistics about September 11th, 2012.