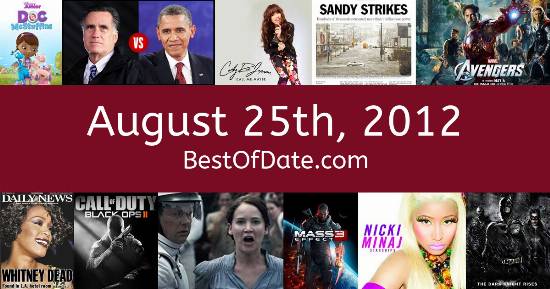 Songs that were on top of the music singles charts in the USA and the United Kingdom on August 25th, 2012.

The date is August 25th, 2012 and it's a Saturday. Anyone born today will have the star sign Virgo. Currently, people are enjoying their weekend.

The summer of 2012 is coming to an end and fall is just around the corner. In America, the song Whistle by Flo Rida is on top of the singles charts. Over in the UK, How We Do Party by Rita Ora is the number one hit song.

Barack Obama is currently the President of the United States and the movie The Expendables 2 is at the top of the Box Office. In the United Kingdom, David Cameron is the current Prime Minister. Video rental stores such as Blockbuster are continuing to close their doors at the moment. This is due to the increasing popularity of online streaming services such as Netflix and Hulu.

In music news, a new song called "Gangnam Style" by South Korean singer Psy is currently going viral at the moment. The much-anticipated video game "StarCraft II: Wings of Liberty" has just been released by Blizzard Entertainment. The run-up to the 2012 United States presidential election is currently taking place, as President Barack Obama goes up against Republican nominee Mitt Romney.

NASA have announced that the space probe Voyager 1 has entered interstellar space. Tributes are pouring in following the recent death of American astronaut Neil Armstrong. Armstrong was the first person to walk on the Moon. On TV, people are watching popular shows such as "Glee", "Homeland", "American Horror Story" and "Black Mirror".

Meanwhile, gamers are playing titles such as "Gears of War 3", "Call of Duty: Modern Warfare 3", "The Elder Scrolls V: Skyrim" and "Mass Effect 3". Children and teenagers are currently watching television shows such as "Peppa Pig", "Mickey Mouse Clubhouse", "Glee" and "Austin & Ally". If you're a kid or a teenager, then you're probably playing with toys such as the Xbox 360, the PlayStation 3 and the LeapPad Explorer.

If you are looking for some childhood nostalgia, then check out August 25th, 2018 instead.

Celebrities, historical figures and notable people who were born on the 25th of August.

Barack Obama was the President of the United States on August 25th, 2012.

David Cameron was the Prime Minister of the United Kingdom on August 25th, 2012.

Enter your date of birth below to find out how old you were on August 25th, 2012.