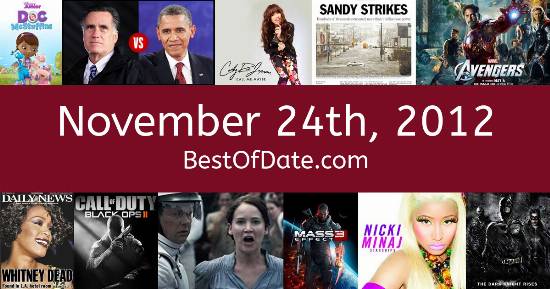 On November 24th, 2012, the following songs were at the top of the music charts in the USA and the UK.

The top "Box Office" movie on this date was the film "Skyfall".

The date is November 24th, 2012, and it's a Saturday. Anyone born today will have the star sign Sagittarius. Currently, people are enjoying their weekend.

In America, Thanksgiven Day and Black Friday have recently come and passed. People are now beginning to look forward to Christmas. It's November, so the evenings are getting darker and the days are getting colder. In America, the song One More Night by Maroon 5 is on top of the singles charts.

Over in the UK, Little Things by One Direction is the number one hit song. Barack Obama is currently the President of the United States, and the movie Skyfall is at the top of the Box Office. In the United Kingdom, David Cameron is the current Prime Minister.

Video rental stores such as Blockbuster are continuing to close their doors at the moment. This is due to the increasing popularity of online streaming services such as Netflix and Hulu. It's 2012, so the music charts are being dominated by artists such as Carly Rae Jepsen, Gotye, Flo Rida, LMFAO and Ellie Goulding. Microsoft have released their new operating system "Windows 8".

The recent passing of "Amendment 64" means that Colorado has become the first US state to legalize the recreational use of marijuana. The game "Call of Duty: Black Ops II" has just been released. Nintendo have recently released their new video game console "the Wii U". This is the first Nintendo console to support HD graphics.

Pop star Rihanna has released her new album "Unapologetic". The album contains songs such as "Diamonds" and Stay". Chelsea manager Roberto Di Matteo has recently been sacked despite winning the Champions League last season. The music video "Gangnam Style" by South Korean singer PSY has just become the most viewed video on Youtube.

If you were to travel back to this day, notable figures such as Aaron Swartz, Robert F. Chew, Chris Kyle and Reeva Steenkamp would all be still alive. On TV, people are watching popular shows such as "Gossip Girl", "Glee", "Boardwalk Empire" and "American Horror Story". Meanwhile, gamers are playing titles such as "Metal Gear Solid HD Collection", "DayZ (mod)", "Guild Wars 2" and "Borderlands 2".

Kids and teenagers are watching TV shows such as "The Fairly OddParents", "Curious George", "Victorious" and "Jessie". If you're a kid or a teenager, then you're probably playing with toys such as the Xbox 360, the PlayStation 3, the KidiZoom Camera and Skylanders Giants figures.

These are trending news stories and fads that were prevalent at this time. These are topics that would have been in the media on November 24th, 2012.

Check out our personality summary for people who were born on November 24th, 2012.

Television shows that people were watching in November, 2012.

Popular video games that people were playing in November of 2012.

If you are looking for some childhood nostalgia, then you should check out November 24th, 2018 instead.

Barack Obama was the President of the United States on November 24th, 2012.

Enter your date of birth below to find out how old you were on November 24th, 2012.
This information is not transmitted to our server.

Here are some fun statistics about November 24th, 2012.