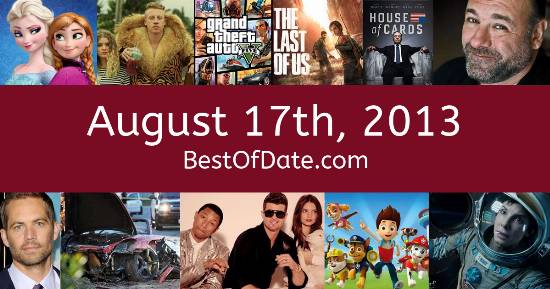 These songs were on top of the music charts in the United States and the United Kingdom on August 17th, 2013.

The movie "Elysium" was at the top of the Box Office on this day.

The following comments about August 17th, 2013 were written by our visitors.

I went to see Eminem at Slane Castle on this day. Tyler The Creator and his group were performing at it as well. I was hammered drunk, lol. It's crazy to think that it's been nearly 9 years...
Posted on March 9th, 2022 21:57

The date is August 17th, 2013, and it's a Saturday. Anyone born today will have the star sign Leo. Currently, people are enjoying their weekend.

Barack Obama is currently the President of the United States, and the movie Elysium is at the top of the Box Office. In the United Kingdom, David Cameron is the current Prime Minister. Video rental stores such as Blockbuster are continuing to close their doors at the moment. This is due to the increasing popularity of online streaming services such as Netflix and Hulu.

It's 2013, so the music charts are being dominated by artists such as Macklemore, Robin Thicke, Imagine Dragons and Bruno Mars. A social networking website called Vine is extremely popular at the moment. Former NSA contractor Edward Snowden has just revealed to the public that American intelligence agencies have been running a widespread global surveillance programme called PRISM.

Video game fans are currently excited about the upcoming release of Grand Theft Auto V. The game, which will take place in San Andreas, is set to be released on September 17th. There is shock following news that Reality TV star Gia Allemand has committed suicide. Actress Lisa Robin Kelly, who portrayed Eric Forman's sister Laurie in "That 70s Show", has passed away at the age of 43 due to drug intoxication.

If you were to travel back to this day, notable figures such as Lee Thompson Young, Paul Walker, Nelson Mandela and James Avery would all be still alive. On TV, people are watching popular shows such as "Two and a Half Men", "How I Met Your Mother", "Glee" and "Once Upon a Time". Meanwhile, gamers are playing titles such as "Clash of Clans", "Call of Duty: Black Ops II", "Aliens: Colonial Marines" and "Dota 2".

Children and teenagers are currently watching television shows such as "Johnny Test", "Mickey Mouse Clubhouse", "Doc McStuffins" and "Dog with a Blog". Popular toys at the moment include the likes of the Xbox 360, the PlayStation 3, Skylanders Giants figures and Rainbow Loom.

These are trending news stories and fads that were prevalent at this time. These are topics that would have been in the media on August 17th, 2013.

News stories and other events that happened around August 17th, 2013.

Check out our personality summary for people who were born on August 17th, 2013.

If you are looking for some childhood nostalgia, then you should check out August 17th, 2019 instead.

Barack Obama was the President of the United States on August 17th, 2013.

David Cameron was the Prime Minister of the United Kingdom on August 17th, 2013.

Find out what your age was on August 17th, 2013, by entering your DOB below.
This information is not saved on our server.