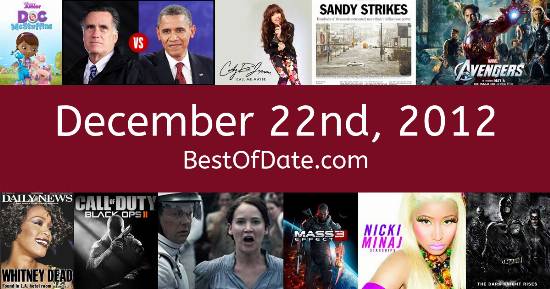 December 22nd, 2012 relates to an event in a movie, book, game or television series:

Songs that were on top of the music singles charts in the USA and the United Kingdom on December 22nd, 2012:

The date is December 22nd, 2012 and it's a Saturday. Anyone born today will have the star sign Capricorn. Currently, people are enjoying their weekend.

Christmas Day of 2012 is fast approaching and the excitement is building. Department stores are thronged with Christmas shoppers. In America, the song Locked Out Of Heaven by Bruno Mars is on top of the singles charts. Over in the UK, Impossible by James Arthur is the number one hit song.

Barack Obama is currently the President of the United States and the movie Skyfall is at the top of the Box Office. In the United Kingdom, David Cameron is the current Prime Minister. It's 2012, so the music charts are being dominated by artists such as Carly Rae Jepsen, Gotye, Flo Rida, LMFAO and Ellie Goulding.

Microsoft have released their new operating system "Windows 8". Nintendo have recently released their new video game console "the Wii U". This is the first Nintendo console to support HD graphics. People are reacting in shock and anger at news that a mass shooting has occurred at the Sandy Hook Elementary School in Newtown, Connecticut. 20 children have lost their lives and the incident has reignited the debate about gun control in America.

Cassadee Pope has just won the third season of The Voice. Ashton Kutcher has filed for divorce from Demi Moore after seven years of marriage. The celebrity couple have been separated for a year now. Baseball fans are in mourning following the recent suicide of Ryan Freel.

On TV, people are watching popular shows such as "Dora the Explorer", "CSI: NY", "The Office" and "Glee". Meanwhile, gamers are playing titles such as "DayZ (mod)", "Mass Effect 3", "Sleeping Dogs" and "Call of Duty: Black Ops II". Kids and teenagers are watching TV shows such as "The Fairly OddParents", "Glee", "Big Time Rush" and "Lab Rats: Bionic Island".

Celebrities, historical figures and noteable people who were born on the 22nd of December:

Who was the Prime Minister of the United Kingdom on December 22nd, 2012?

Enter your date of birth below to find out how old you were on December 22nd, 2012.

Looking for some nostalgia? Here are some Youtube videos relating to December 22nd, 2012. Please note that videos are automatically selected by Youtube and that results may vary! Click on the "Load Next Video" button to view the next video in the search playlist. In many cases, you'll find episodes of old TV shows, documentaries, music videos and soap dramas.

Here are some fun statistics about December 22nd, 2012.