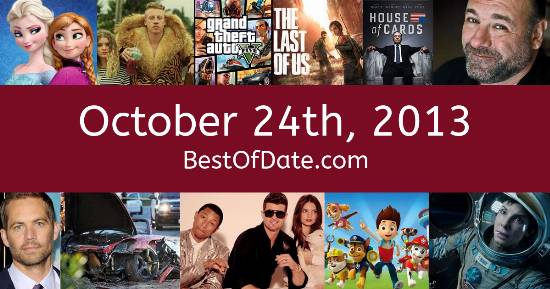 Songs that were on top of the music singles charts in the USA and the United Kingdom on October 24th, 2013.

The date is October 24th, 2013 and it's a Thursday. Anyone born today will have the star sign Scorpio. The summer is long gone. Temperatures have started to become much cooler and the evenings are beginning to get darker.

Fallen leaves have carpeted driveways, lawns, pathways and sidewalks and there's a fresh earthy scent in the ear. Halloween of 2013 is quickly approaching and stores are selling costumes and decorations. The song Royals by Lorde is on top of the singles charts in both the USA and the United Kingdom.

Barack Obama is currently the President of the United States and the movie Gravity is at the top of the Box Office. In the United Kingdom, David Cameron is the current Prime Minister. Video rental stores such as Blockbuster are continuing to close their doors at the moment. This is due to the increasing popularity of online streaming services such as Netflix and Hulu.

The app Snapchat has just released a new feature called "My Story". If you were to travel back to this day, notable figures such as Paul Walker, Nelson Mandela, James Avery and Ariel Sharon would all be still alive. On TV, people are watching popular shows such as "Prison Break", "RuPaul's Drag Race", "The Vampire Diaries" and "Boardwalk Empire".

Meanwhile, gamers are playing titles such as "Minecraft", "DmC: Devil May Cry", "Tom Clancy's Splinter Cell: Blacklist" and "Pokémon X and Y". Children and teenagers are currently watching television shows such as "Dora the Explorer", "Phineas and Ferb", "Good Luck Charlie" and "Doc McStuffins". If you're a kid or a teenager, then you're probably playing with toys such as the PlayStation 3, Skylanders Giants figures, the Wii U and the Furby Boom.

If you are looking for some childhood nostalgia, then check out October 24th, 2019 instead.

Barack Obama was the President of the United States on October 24th, 2013.

David Cameron was the Prime Minister of the United Kingdom on October 24th, 2013.

Enter your date of birth below to find out how old you were on October 24th, 2013.

Here are some fun statistics about October 24th, 2013.