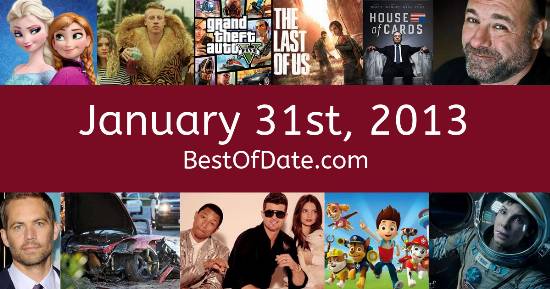 Songs that were on top of the music singles charts in the USA and the United Kingdom on January 31st, 2013.

The date is January 31st, 2013 and it's a Thursday. Anyone born today will have the star sign Aquarius. In America, the song Thrift Shop by Macklemore & Ryan Lewis is on top of the singles charts.

Over in the UK, Get Up by Bingo Players is the number one hit song. Barack Obama is currently the President of the United States and the movie Hansel and Gretel is at the top of the Box Office. In the United Kingdom, David Cameron is the current Prime Minister.

It's 2013, so the music charts are being dominated by artists such as Macklemore, Robin Thicke, Imagine Dragons and Bruno Mars. A new video-hosting service called "Vine" has just been launched. In Ireland, the nation is mourning the death of Detective Garda Adrian Donohoe, who was recently shot dead by an armed gang in County Louth.

A tragic fire at a nightclub in Santa Maria, Brazil has left 242 people dead. An Internet meme called "The Harlem Shake" is currently going viral. On TV, people are watching popular shows such as "Sons of Anarchy", "RuPaul's Drag Race", "Modern Family" and "Black Mirror".

Meanwhile, gamers are playing titles such as "Terraria", "Halo 4", "Call of Duty: Black Ops II" and "DmC: Devil May Cry". Children and teenagers are currently watching television shows such as "Phineas and Ferb", "Good Luck Charlie", "Jessie" and "Dog with a Blog". If you're a kid or a teenager, then you're probably playing with toys such as the Xbox 360, the PlayStation 3 and the Wii U.

Celebrities, historical figures and notable people who were born on the 31st of January.

Barack Obama was the President of the United States on January 31st, 2013.

David Cameron was the Prime Minister of the United Kingdom on January 31st, 2013.

Enter your date of birth below to find out how old you were on January 31st, 2013.

Here are some fun statistics about January 31st, 2013.

Leave a comment and tell everyone why January 31st, 2013 is important to you.