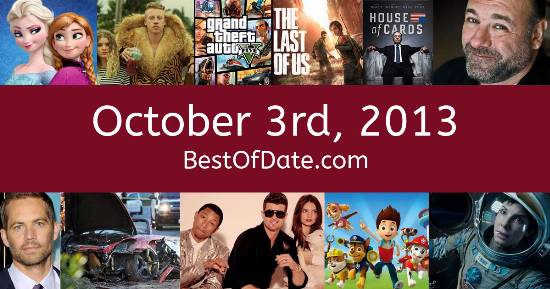 Songs that were on top of the music singles charts in the USA and the United Kingdom on October 3rd, 2013:

The date is October 3rd, 2013 and it's a Thursday. Anyone born today will have the star sign Libra. The summer is long gone. Temperatures have started to become much cooler and the evenings are beginning to get darker.

Fallen leaves have carpeted driveways, lawns, pathways and sidewalks and there's a fresh earthy scent in the ear. In America, the song Wrecking Ball by Miley Cyrus is on top of the singles charts. Over in the UK, Counting Stars by One Republic is the number one hit song.

Barack Obama is currently the President of the United States and the movie Cloudy with a Chance of Meatballs 2 is at the top of the Box Office. In the United Kingdom, David Cameron is the current Prime Minister. It's 2013, so the music charts are being dominated by artists such as Macklemore, Robin Thicke, Imagine Dragons and Bruno Mars.

A social networking website called Vine is extremely popular at the moment. A new Internet meme called "Doge", which consists of an image of a Shiba Inu dog with broken English written on it, is being shared online at the moment. The final episode of crime drama "Breaking Bad" has just been aired on television. In Nigeria, there are tragic scenes after Islamist militant group Boko Haram murders 42 people at the College of Agriculture.

There are tributes pouring in for author Tom Clancy, who has passed away at the age of 66 due to heart failure. The United States federal government is currently in a shutdown due to a congressional stalemate over the implementation of Obamacare. The app Snapchat has just released a new feature called "My Story".

People are watching popular TV shows such as "How I Met Your Mother", "The Walking Dead", "Homeland" and "House of Cards". Meanwhile, gamers are playing titles such as "Halo 4", "Aliens: Colonial Marines", "The Last of Us" and "ARMA 3". Kids and teenagers are watching TV shows such as "Peppa Pig", "Phineas and Ferb", "Good Luck Charlie" and "Sam & Cat".

Who was the Prime Minister of the United Kingdom on October 3rd, 2013?

Enter your date of birth below to find out how old you were on October 3rd, 2013.

Looking for some nostalgia? Here are some Youtube videos relating to October 3rd, 2013. Please note that videos are automatically selected by Youtube and that results may vary! Click on the "Load Next Video" button to view the next video in the search playlist. In many cases, you'll find episodes of old TV shows, documentaries, music videos and soap dramas.

Here are some fun statistics about October 3rd, 2013.