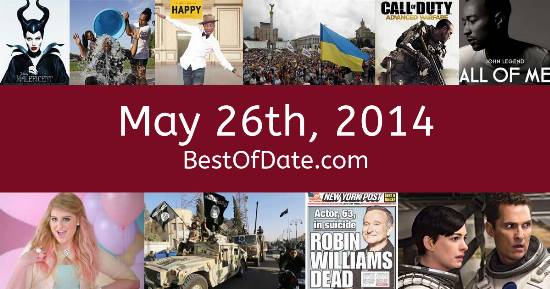 Songs that were on top of the music singles charts in the USA and the United Kingdom on May 26th, 2014:

The date is May 26th, 2014 and it's a Monday. Anyone born today will have the star sign Gemini. The summer of 2014 has finally arrived. The weather has warmed up and the evenings are brighter than usual.

In America, the song All of Me by John Legend is on top of the singles charts. Over in the UK, I Will Never Let You Down by Rita Ora is the number one hit song. Barack Obama is currently the President of the United States and the movie X-Men: Days of Future Past is at the top of the Box Office.

A new Internet slang phrase called "Sliding into your DMs" is becoming popular at the moment. The trial of Australian entertainer Rolf Harris for indecent assault is currently underway in England. The phrase "You the real MVP" is becoming popular online following Kevin Durant's heartfelt acceptance speech for the NBA's Most Valuable Player Award.

Josh Kaufman has just won the sixth season of The Voice. Meanwhile, Caleb Johnson has been crowned as the winner of the 13th season of American Idol. A 22-year-old man called Elliot Rodger has murdered six people during a killing spree in Isla Vista, California. A 107,000-word manifesto and several Youtube videos have been found in the aftermath of the attack, in which Rodger rambles on about how he will punish women for rejecting him.

In celebrity news, Kanye West and Kim Kardashian have just been married in Florence, Italy. In Irish politics, Eamon Gilmore has just stepped down as Labour leader following huge losses for his party at the local elections. On TV, people are watching popular shows such as "Community", "American Horror Story", "Orange Is the New Black" and "Peaky Blinders".

Meanwhile, gamers are playing titles such as "Saints Row IV", "Grand Theft Auto V", "Battlefield 4" and "DayZ". Kids and teenagers are watching TV shows such as "The Fairly OddParents", "Peppa Pig", "Team Umizoomi" and "Every Witch Way". Popular toys include the likes of "The Wii U", "PlayStation 4", "Xbox One" and "Frozen dolls".

Notable events that occurred around May 26th, 2014:

Celebrities, historical figures and noteable people who were born on the 26th of May:

National holidays and famous events that fall on the 26th of May:

Who was the Prime Minister of the United Kingdom on May 26th, 2014?

Looking for some nostalgia? Here are some Youtube videos relating to May 26th, 2014. Please note that videos are automatically selected by Youtube and that results may vary! Click on the "Load Next Video" button to view the next video in the search playlist. In many cases, you'll find episodes of old TV shows, documentaries, music videos and soap dramas.