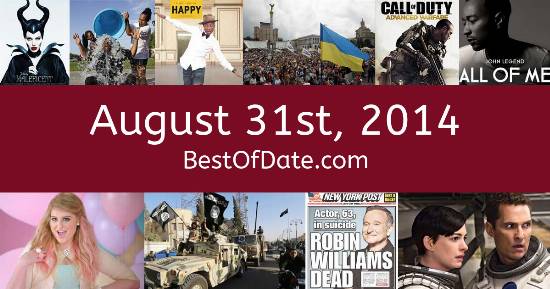 Songs that were on top of the music singles charts in the USA and the United Kingdom on August 31st, 2014.

The date is August 31st, 2014 and it's a Sunday. Anyone born today will have the star sign Virgo. Currently, people are enjoying their weekend.

The summer of 2014 is coming to an end and fall is just around the corner. In America, the song Rude by Magic! is on top of the singles charts. Over in the UK, Lovers on the Sun by David Guetta featuring Sam Martin is the number one hit song.

Barack Obama is currently the President of the United States and the movie Ninja Turtles is at the top of the Box Office. In the United Kingdom, David Cameron is the current Prime Minister. Video rental stores such as Blockbuster are continuing to close their doors at the moment. This is due to the increasing popularity of online streaming services such as Netflix and Hulu.

A social networking website called Vine is extremely popular at the moment. It is 2014, so the music charts are being dominated by artists such as Pharrell Williams, Katy Perry, John Legend, Iggy Azalea, Meghan Trainor, Lorde and Jason Derulo. An activity called the "Ice Bucket Challenge" is currently going viral on social media at the moment. The activity, which is being done to promote awareness of ALS, involves someone having a bucket of ice water dumped over their head.

The Ebola virus epidemic in Western Africa has been receiving around-the-clock news coverage. "Wrecking Ball" by Miley Cyrus has just won "Video of the Year" at the 2014 MTV Video Music Awards. Former Death Row CEO Suge Knight has been shot and injured at a pre-VMA party in Hollywood.

In soccer, Manchester United have signed Real Madrid star Angel Di Maria. Hundreds of hacked naked pictures of famous celebrities have just been leaked on the Internet. Commentators are labeling this event "Celebgate" and "The Fappening". On TV, people are watching popular shows such as "Bones", "White Collar", "American Horror Story" and "Rick and Morty".

Meanwhile, gamers are playing titles such as "Grand Theft Auto V", "Assassin's Creed IV: Black Flag", "Call of Duty: Ghosts" and "Dead Rising 3". Children and teenagers are currently watching television shows such as "LazyTown", "Curious George", "Paw Patrol" and "Sheriff Callie's Wild West". Popular toys at the moment include the likes of the Wii U, the Furby Boom, the PlayStation 4 and the Xbox One.

If you are looking for some childhood nostalgia, then check out August 31st, 2020 instead.

Barack Obama was the President of the United States on August 31st, 2014.

David Cameron was the Prime Minister of the United Kingdom on August 31st, 2014.

Enter your date of birth below to find out how old you were on August 31st, 2014.