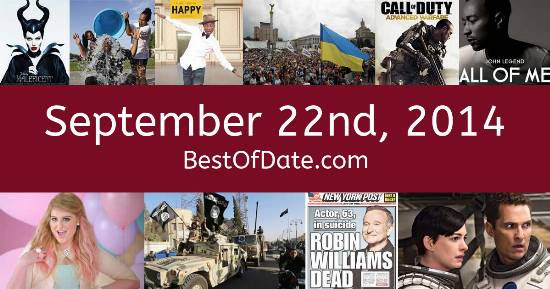 These songs were on top of the music charts in the United States and the United Kingdom on September 22nd, 2014.

The top "Box Office" movie on this date was the film "The Maze Runner".

The date is September 22nd, 2014, and it's a Monday. Anyone born today will have the star sign Virgo. Schools and colleges are starting again and Autumn has officially arrived. As a result, temperatures are beginning to cool and trees are starting to shed their leaves.

The earthy smells of fall have started to fill the air. In America, the song All About That Bass by Meghan Trainor is on top of the singles charts. Over in the UK, Blame by Calvin Harris featuring John Newman is the number one hit song.

Barack Obama is currently the President of the United States, and the movie The Maze Runner is at the top of the Box Office. In the United Kingdom, David Cameron is the current Prime Minister. Video rental stores such as Blockbuster are continuing to close their doors at the moment. This is due to the increasing popularity of online streaming services such as Netflix and Hulu.

South African sprinter Oscar Pistorius has just been found guilty for the 2013 murder of his girlfriend Reeva Steenkamp. Northern Ireland politician and religious leader Ian Paisley has passed away at the age of 88. In Australia, a huge search is underway for a missing 3-year-old boy called William Tyrrell, who recently disappeared from his foster parents home in Kendall, New South Wales. Scotland has just voted to remain within the United Kingdom. In celebrity news, Kris Jenner has filed for divorce from Bruce Jenner.

If you were to travel back to this day, notable figures such as Diem Brown, Junior Malanda, Greg Plitt and Ben E. King would all be still alive. On TV, people are watching popular shows such as "The Vampire Diaries", "Community", "American Horror Story" and "Gotham". Meanwhile, gamers are playing titles such as "Clash of Clans", "Batman: Arkham Origins", "Flappy Bird" and "Titanfall".

Children and teenagers are currently watching television shows such as "WordGirl", "Jessie", "Agents of S.H.I.E.L.D." and "Henry Danger". Popular toys at the moment include the likes of the Furby Boom, the PlayStation 4, the Xbox One and Frozen dolls.

These are trending news stories and fads that were prevalent at this time. These are topics that would have been in the media on September 22nd, 2014.

Check out our personality summary for people who were born on September 22nd, 2014.

If you are looking for some childhood nostalgia, then you should check out September 22nd, 2020 instead.

Barack Obama was the President of the United States on September 22nd, 2014.

David Cameron was the Prime Minister of the United Kingdom on September 22nd, 2014.

Enter your date of birth below to find out how old you were on September 22nd, 2014.
This information is not transmitted to our server.

Here are some fun statistics about September 22nd, 2014.