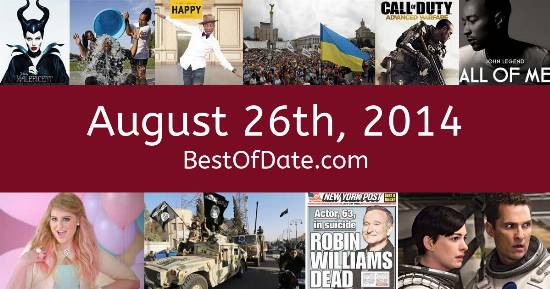 Songs that were on top of the music singles charts in the USA and the United Kingdom on August 26th, 2014.

The date is August 26th, 2014 and it's a Tuesday. Anyone born today will have the star sign Virgo. The summer of 2014 is coming to an end and fall is just around the corner.

In America, the song Rude by Magic! is on top of the singles charts. Over in the UK, Am I Wrong by Nico & Vinz is the number one hit song. Barack Obama is currently the President of the United States and the movie Ninja Turtles is at the top of the Box Office.

It is 2014, so the music charts are being dominated by artists such as Pharrell Williams, Katy Perry, John Legend, Iggy Azalea, Meghan Trainor, Lorde and Jason Derulo. An activity called the "Ice Bucket Challenge" is currently going viral on social media at the moment. The activity, which is being done to promote awareness of ALS, involves someone having a bucket of ice water dumped over their head. The Ebola virus epidemic in Western Africa has been receiving around-the-clock news coverage.

Brad Pitt and Angelina Jolie have just been married in France. "Wrecking Ball" by Miley Cyrus has just won "Video of the Year" at the 2014 MTV Video Music Awards. Former Death Row CEO Suge Knight has been shot and injured at a pre-VMA party in Hollywood.

In soccer, Manchester United have signed Real Madrid star Angel Di Maria. If you were to travel back to this day, notable figures such as Joan Rivers, Simone Battle, Ian Paisley and Diem Brown would all be still alive. On TV, people are watching popular shows such as "Two and a Half Men", "Grey's Anatomy", "Glee" and "Modern Family".

Meanwhile, gamers are playing titles such as "Clash of Clans", "Saints Row IV", "Grand Theft Auto V" and "Watchdogs". Kids and teenagers are watching TV shows such as "The Fairly OddParents", "Mickey Mouse Clubhouse", "Phineas and Ferb" and "Dog with a Blog". If you're a kid or a teenager, then you're probably playing with toys such as the Wii U, Rainbow Loom, the Furby Boom and the Xbox One.

If you are looking for some childhood nostalgia, then check out August 26th, 2020 instead.

Barack Obama was the President of the United States on August 26th, 2014.

David Cameron was the Prime Minister of the United Kingdom on August 26th, 2014.

Enter your date of birth below to find out how old you were on August 26th, 2014.