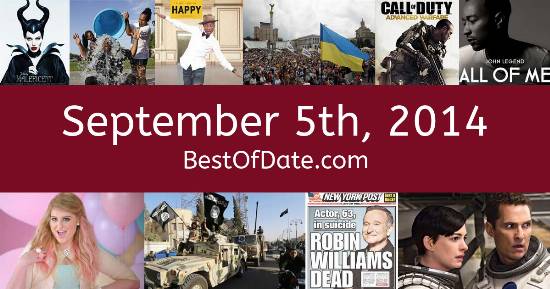 Events that occurred on September 5th, 2014:

Songs that were on top of the music singles charts in the USA and the United Kingdom on September 5th, 2014:

The date is September 5th, 2014 and it's a Friday. Anyone born today will have the star sign Virgo. Currently, people have "that Friday feeling" and are looking forward to the weekend.

Schools have started back and autumn has arrived, so temperatures have started to cool and trees are beginning to shed their leaves. In America, the song Rude by Magic! is on top of the singles charts. Over in the UK, Lovers on the Sun by David Guetta featuring Sam Martin is the number one hit song.

Barack Obama is currently the President of the United States and the movie Guardians of the Galaxy is at the top of the Box Office. In the United Kingdom, David Cameron is the current Prime Minister. A social networking website called Vine is extremely popular at the moment.

It is 2014, so the music charts are being dominated by artists such as Pharrell Williams, Katy Perry, John Legend, Iggy Azalea, Meghan Trainor, Lorde and Jason Derulo. The Ebola virus epidemic in Western Africa has been receiving around-the-clock news coverage. Hundreds of hacked naked pictures of famous celebrities have just been leaked on the Internet. Commentators are labeling this event "Celebgate" and "The Fappening".

In soccer, Radamel Falcao has just signed for Manchester United on loan. Tributes are pouring in for actress Joan Rivers, who has unexpectedly passed away after suffering complications from a minor throat surgery. The music world is in shock following news that G.R.L. singer Simone Battle has committed suicide at the age of 25.

People are watching popular TV shows such as "RuPaul's Drag Race", "The Walking Dead", "House of Cards" and "Rick and Morty". Meanwhile, gamers are playing titles such as "Saints Row IV", "Call of Duty: Ghosts", "Rust" and "Titanfall". Kids and teenagers are watching TV shows such as "The Fairly OddParents", "Glee", "Paw Patrol" and "Girl Meets World".

Who was the Prime Minister of the United Kingdom on September 5th, 2014?

Enter your date of birth below to find out how old you were on September 5th, 2014.

Looking for some nostalgia? Here are some Youtube videos relating to September 5th, 2014. Please note that videos are automatically selected by Youtube and that results may vary! Click on the "Load Next Video" button to view the next video in the search playlist. In many cases, you'll find episodes of old TV shows, documentaries, music videos and soap dramas.

Here are some fun statistics about September 5th, 2014.