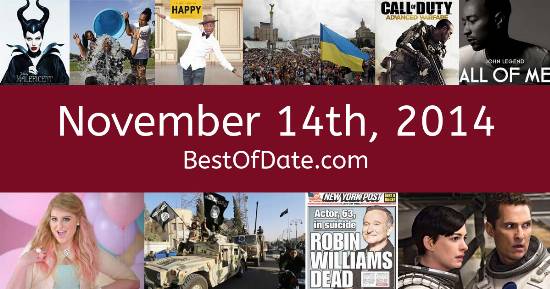 These songs were on top of the music charts in the United States and the United Kingdom on November 14th, 2014.

The movie "Dumb and Dumber To" was at the top of the Box Office on this day.

The date is November 14th, 2014, and it's a Friday. Anyone born today will have the star sign Scorpio. Currently, people have "that Friday feeling" and are looking forward to the weekend.

It's November, so the evenings are getting darker and the days are getting colder. In America, the song All About That Bass by Meghan Trainor is on top of the singles charts. Over in the UK, Thinking Out Loud by Ed Sheeran is the number one hit song.

Barack Obama is currently the President of the United States, and the movie Dumb and Dumber To is at the top of the Box Office. In the United Kingdom, David Cameron is the current Prime Minister. Video rental stores such as Blockbuster are continuing to close their doors at the moment. This is due to the increasing popularity of online streaming services such as Netflix and Hulu.

A social networking website called Vine is extremely popular at the moment. It is 2014, so the music charts are being dominated by artists such as Pharrell Williams, Katy Perry, John Legend, Iggy Azalea, Meghan Trainor, Lorde and Jason Derulo. A video of stand-up comedian Hannibal Buress calling actor Bill Cosby a rapist has caught the nation's attention. Coverage of the allegations are beginning to intensify.

The FPS game "Call of Duty: Advanced Warfare" has been released. In technology news, a new virtual assistant AI called "Amazon Alexa" has just been released. The device allows people to interact with it via voice commands. In Mexico, a gruesome discovery has just been announced by Mexican Attorney General Jesús Murillo Karam. Several plastic bags containing human remains have been found by a river in Cocula. It is believed that the remains belong to some of the 43 male students that were kidnapped by rouge police officers in September.

Reality TV star Diem Brown has died from ovarian cancer at the age of 34. If you were to travel back to this day, notable figures such as Diem Brown, Junior Malanda, Greg Plitt and Ben E. King would all be still alive. On TV, people are watching popular shows such as "Two and a Half Men", "Grey's Anatomy", "The Big Bang Theory" and "Modern Family".

Meanwhile, gamers are playing titles such as "Minecraft", "Grand Theft Auto V", "Dead Rising 3" and "Assassin's Creed: Unity". Kids and teenagers are watching TV shows such as "Mickey Mouse Clubhouse", "Glee", "Jake and the Never Land Pirates" and "Henry Danger". If you're a kid or a teenager, then you're probably playing with toys such as the Wii U, Rainbow Loom, the Furby Boom and the Xbox One.

These are trending news stories and fads that were prevalent at this time. These are topics that would have been in the media on November 14th, 2014.

Check out our personality summary for people who were born on November 14th, 2014.

Television shows that people were watching in November, 2014.

Popular video games that people were playing in November of 2014.

If you are looking for some childhood nostalgia, then you should check out November 14th, 2020 instead.

Barack Obama was the President of the United States on November 14th, 2014.

David Cameron was the Prime Minister of the United Kingdom on November 14th, 2014.

Enter your date of birth below to find out how old you were on November 14th, 2014.
This information is not transmitted to our server.

Here are some fun statistics about November 14th, 2014.