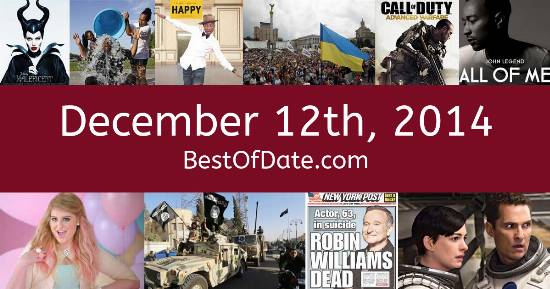 Songs that were on top of the music singles charts in the USA and the United Kingdom on December 12th, 2014.

The date is December 12th, 2014 and it's a Friday. Anyone born today will have the star sign Sagittarius. Currently, people have "that Friday feeling" and are looking forward to the weekend.

The Christmas season of 2014 is in full swing. The decorations are up and festive songs are playing on the radio. In America, the song Blank Space by Taylor Swift is on top of the singles charts. Over in the UK, These Days by Take That is the number one hit song.

Barack Obama is currently the President of the United States and the movie Exodus: Gods and Kings is at the top of the Box Office. In the United Kingdom, David Cameron is the current Prime Minister. Video rental stores such as Blockbuster are continuing to close their doors at the moment. This is due to the increasing popularity of online streaming services such as Netflix and Hulu.

A social networking website called Vine is extremely popular at the moment. It is 2014, so the music charts are being dominated by artists such as Pharrell Williams, Katy Perry, John Legend, Iggy Azalea, Meghan Trainor, Lorde and Jason Derulo. World Superbike racer Carl "Foggy" Fogarty has just won the UK version of "I'm a Celebrity... Get Me Out of Here!".

The final episode of "Sons of Anarchy" has recently been aired on television. In celebrity news, Nick Cannon has filed for divorce from Mariah Carey after six years of marraige. If you were to travel back to this day, notable figures such as Junior Malanda, Greg Plitt, Ben E. King and B.B. King would all be still alive.

On TV, people are watching popular shows such as "Two and a Half Men", "The Vampire Diaries", "Homeland" and "Rick and Morty". Meanwhile, gamers are playing titles such as "Titanfall", "Destiny", "Call of Duty: Advanced Warfare" and "Far Cry 4". Children and teenagers are currently watching television shows such as "Dora the Explorer", "Phineas and Ferb", "Team Umizoomi" and "Paw Patrol".

If you're a kid or a teenager, then you're probably playing with toys such as the Wii U, the Furby Boom, the PlayStation 4 and Frozen dolls.

If you are looking for some childhood nostalgia, then check out December 12th, 2020 instead.

Barack Obama was the President of the United States on December 12th, 2014.

David Cameron was the Prime Minister of the United Kingdom on December 12th, 2014.

Enter your date of birth below to find out how old you were on December 12th, 2014.

Here are some fun statistics about December 12th, 2014.