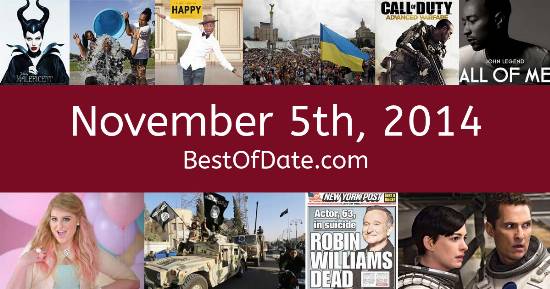 November 5th, 2014 relates to a fictional event in a movie, book, game or television series.

Songs that were on top of the music singles charts in the USA and the United Kingdom on November 5th, 2014.

The date is November 5th, 2014 and it's a Wednesday. Anyone born today will have the star sign Scorpio. It's November, so the evenings are getting darker and the days are getting colder.

The song All About That Bass by Meghan Trainor is on top of the singles charts in both the USA and the United Kingdom. Barack Obama is currently the President of the United States and the movie Ouija is at the top of the Box Office. In the United Kingdom, David Cameron is the current Prime Minister.

The Ebola virus epidemic in Western Africa has been receiving around-the-clock news coverage. A video of stand-up comedian Hannibal Buress calling actor Bill Cosby a rapist has caught the nation's attention. Coverage of the allegations are beginning to intensify. In baseball, the San Francisco Giants have won the 2014 World Series after defeating the Kansas City Royals 4-3.

Apple CEO Tim Cook has recently come out as gay in an editorial for Bloomberg Business. The FPS game "Call of Duty: Advanced Warfare" has been released. On TV, people are watching popular shows such as "Prison Break", "Homeland", "American Horror Story" and "Peaky Blinders".

Meanwhile, gamers are playing titles such as "Call of Duty: Ghosts", "Dead Rising 3", "Watchdogs" and "Call of Duty: Advanced Warfare". Children and teenagers are currently watching television shows such as "Mickey Mouse Clubhouse", "Jessie", "Paw Patrol" and "Girl Meets World". Popular toys at the moment include the likes of the Wii U, the PlayStation 4, the Xbox One and Frozen dolls.

Celebrities, historical figures and notable people who were born on the 5th of November.

Barack Obama was the President of the United States on November 5th, 2014.

David Cameron was the Prime Minister of the United Kingdom on November 5th, 2014.

Enter your date of birth below to find out how old you were on November 5th, 2014.

Here are some fun statistics about November 5th, 2014.

Have something to say about November 5th, 2014?