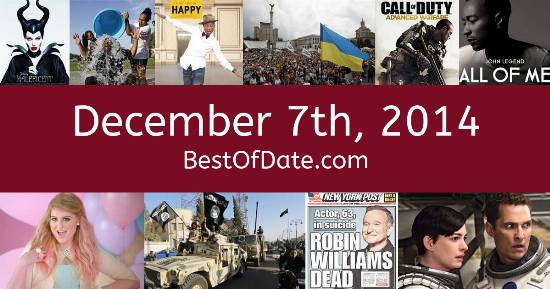 Songs that were on top of the music singles charts in the USA and the United Kingdom on December 7th, 2014.

The date is December 7th, 2014 and it's a Sunday. Anyone born today will have the star sign Sagittarius. Currently, people are enjoying their weekend.

The Christmas season of 2014 has just started. In America, the song Blank Space by Taylor Swift is on top of the singles charts. Over in the UK, These Days by Take That is the number one hit song.

Barack Obama is currently the President of the United States and the movie Mockingjay Part 1 is at the top of the Box Office. In the United Kingdom, David Cameron is the current Prime Minister. Video rental stores such as Blockbuster are continuing to close their doors at the moment. This is due to the increasing popularity of online streaming services such as Netflix and Hulu.

A social networking website called Vine is extremely popular at the moment. It is 2014, so the music charts are being dominated by artists such as Pharrell Williams, Katy Perry, John Legend, Iggy Azalea, Meghan Trainor, Lorde and Jason Derulo. A hacker group identifying itself as the "Guardians of Peace" have leaked confidential data from the film studio Sony Pictures. The hack is believed to be in response to the upcoming release of the "The Interview", a comedy movie about a plot to assassinate North Korean dictator Kim Jong-un.

In more personal news, this website has just been launched. World Superbike racer Carl "Foggy" Fogarty has just won the UK version of "I'm a Celebrity... Get Me Out of Here!". On TV, people are watching popular shows such as "Bones", "The Vampire Diaries", "Homeland" and "American Horror Story".

Meanwhile, gamers are playing titles such as "Saints Row IV", "Rust", "Titanfall" and "Watchdogs". Kids and teenagers are watching TV shows such as "Dora the Explorer", "Curious George", "Phineas and Ferb" and "Jessie". Popular toys at the moment include the likes of the Wii U, the PlayStation 4, the Xbox One and Frozen dolls.

If you are looking for some childhood nostalgia, then check out December 7th, 2020 instead.

Celebrities, historical figures and notable people who were born on the 7th of December.

Barack Obama was the President of the United States on December 7th, 2014.

David Cameron was the Prime Minister of the United Kingdom on December 7th, 2014.

Enter your date of birth below to find out how old you were on December 7th, 2014.

Here are some fun statistics about December 7th, 2014.

Have something to say about December 7th, 2014?