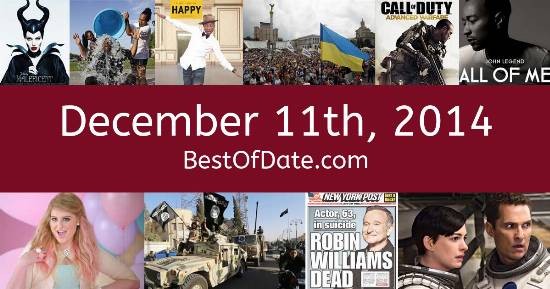 Songs that were on top of the music singles charts in the USA and the United Kingdom on December 11th, 2014.

The date is December 11th, 2014 and it's a Thursday. Anyone born today will have the star sign Sagittarius. The Christmas season of 2014 is in full swing. The decorations are up and festive songs are playing on the radio.

In America, the song Blank Space by Taylor Swift is on top of the singles charts. Over in the UK, These Days by Take That is the number one hit song. Barack Obama is currently the President of the United States and the movie Mockingjay Part 1 is at the top of the Box Office.

It is 2014, so the music charts are being dominated by artists such as Pharrell Williams, Katy Perry, John Legend, Iggy Azalea, Meghan Trainor, Lorde and Jason Derulo. World Superbike racer Carl "Foggy" Fogarty has just won the UK version of "I'm a Celebrity... Get Me Out of Here!". The final episode of "Sons of Anarchy" has recently been aired on television.

If you were to travel back to this day, notable figures such as Junior Malanda, Greg Plitt, Ben E. King and B.B. King would all be still alive. On TV, people are watching popular shows such as "White Collar", "Game of Thrones", "Homeland" and "Peaky Blinders". Meanwhile, gamers are playing titles such as "Clash of Clans", "Saints Row IV", "Flappy Bird" and "Destiny".

Children and teenagers are currently watching television shows such as "The Fairly OddParents", "Curious George", "Lab Rats: Bionic Island" and "Every Witch Way". Popular toys at the moment include the likes of the Wii U, the PlayStation 4, Frozen dolls and Frozen toys.

If you are looking for some childhood nostalgia, then check out December 11th, 2020 instead.

Barack Obama was the President of the United States on December 11th, 2014.

David Cameron was the Prime Minister of the United Kingdom on December 11th, 2014.

Enter your date of birth below to find out how old you were on December 11th, 2014.

Here are some fun statistics about December 11th, 2014.